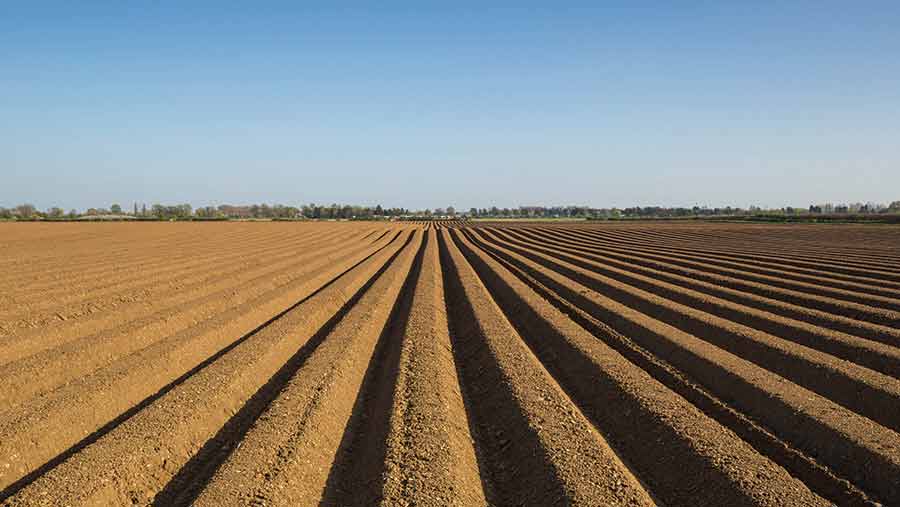 The area of potato cyst nematode (PCN)-free land for seed potato production in Scotland is shrinking and growers must act now to ensure the trend is reversed, experts warn.

About 80% of certified seed planted in Great Britain comes from Scottish farms, with its cooler climate providing kinder conditions to keep crops virus and disease free.

Land destined to be planted with a classified seed potato crop must be free from PCN, with the Scottish government carrying out soil testing before classifying it fit for purpose.

Recent changes in legislation, driven by the latest European Commission PCN directive (2007/33/EC), have resulted in a more vigorous testing regime, which has uncovered a worrying trend, particularly in Angus, where half of all Scotland’s seed potatoes are produced.

Science and Advice for Scottish Agriculture (Sasa) PCN expert Jon Pickup, who negotiated the changes to the directive on the UK’s behalf in Brussels, says 5.4% of the land tested in Scotland is now failing compared with just 2% before the new rules came into force.

“It goes without saying that the more soil you take, the more PCN you are likely to find and there has been an increase of failures on land destined for seed.

“This has particularly been the case in Angus, where growers have moved away from seed and planted more ware potatoes and PCN control hasn’t been as tight, putting pressure on the seed industry in terms of finding PCN-free land.”

In England and Wales, where potatoes are largely grown for ware, 64% of potato land is infested with the potato crop’s number-one pest, estimated to cost the industry £50m annually.

In Scotland that figure is close to 30%, with 70% yet to test positive for the two species of PCN – Globodera pallida and Globodera rostochiensis.

Areas that are predominantly focused on seed, such as the Black Isle in the Highlands, are more aware of the PCN problem and longer rotations ensure land is largely kept PCN free.

However, Dr Pickup warns that areas such as this could move the same way as Angus, which has five times higher incidence of PCN discovery, and the threat of the pest could become much more prevalent everywhere if action isn’t taken.

“We, the Scottish government, need to start communicating with the relevant people in the industry and work together to protect PCN-free land to maintain seed production in its Scottish heartland,” he adds.

While potato growers need to be aware of the issue of “PCN creep” or spread, the same applies to land agents and landowners renting out fields for potato production according to Dr Pickup.

He points out that many don’t understand potato production as well as they should and are not taking into consideration the history and health of their land when renting it out to seed and ware potato growers.

“It is necessary to have good biosecurity measures, including good machinery hygiene, but where land is rented, land owners will be growing other crops and could be inadvertently spreading PCN around their holding.”

Potato Council research and development manager Mike Storey reinforces the point that the threat is not fully understood by those renting out their land.

He also urges ware growers in areas such as Angus to improve the management of PCN on their own land, rather than looking for more land to rent to reduce the risk of the pest spreading to prime seed land.

“Land for seed production is becoming a premium and we need to protect that to maintain a viable British seed industry.

“As a council, we recognise the significant threat PCN poses to domestic seed production and it requires a two-pronged approach to solve the problem,” he adds.

That approach would include protecting the seed land still available and using resistant varieties, nematicides and biofumigation crops to help reduce PCN populations in the soil on existing ware land.

The Dutch potato industry has used resistant varieties with great success to tackle a huge pallida PCN problem and it is hoped varieties coming to the market here could help British growers.

Seed potato producer and distributor Agrico UK grows 1,400ha of seed from the Scottish Highlands down to Exeter in Devon and executive director Archie Gibson believes the industry will be able to reverse the trend that has seen 6% of Scottish seed land being deregistered due to PCN infestation.

He sees pallida-resistant varieties, such as their own Arsenal and Performer, as a vital tool to achieve that. Others include Innovator and Panther from breeder HZPC UK.

“At present there is only a low level of cysts in Scottish soils and the proliferation of non-resistant varieties for ware in places such as Angus and Perthshire could result in an exponential growth of cysts.

“However, in trials using resistant varieties we have shown you can reduce that cyst number by up to 90% in just one season,” explains Mr Gibson.

Finding an end market for new varieties is always difficult in the potato sector, with packers and processors looking for very specific characteristics to meet their needs and so far, uptake has been steady.

However, Mr Gibson says Pepsico-owned Walkers crisps will be contracting growers to produce Arsenal and there has been interest from McCains in the chipping variety Performer, so attitudes are shifting.

He also explains that ongoing work in conjunction with Sasa and Scottish Agronomy is gathering information that could be used to present a case for changing the regulations for growing seed on land infested with PCN, using resistant varieties.

“If we could grow pallida-resistant varieties for seed on land with moderate pallida infestations – as long as the seed is only used on ware land already infested – it could take the pressure off the clean seed growing land elsewhere and help reduce populations overall,” he adds.

Rotation is the most crucial tool for growers looking to slow the rise and spread of PCN populations across British potato land, according to SPUD Agronomy’s John Sarup.

He explains that the problem with PCN, particularly the rise of the more aggressive and hard-to-control Globodera pallida, has been caused by short rotations and the most popular British varieties not having pallida resistance.

“In many cases we have just been selecting pallida, and wider rotations will be key in getting levels down by taking into account the annual population decline rate of 20% – assuming you keep on top of volunteers through the break.”

Ware growers will often cultivate potatoes one year in six, with seed growers on a minimum of one year in eight, but Mr Sarup believes that should be closer to one in ten.

He also believes growers should be rigorously testing their soils, both before and after their crops, whether for seed or ware, to know exactly what their soil’s PCN population status is.

“The threshold of detection of PCN is 3.8m cysts/ha, which means even if the soil test comes back as ‘none detected’, there could still be a high population in the soil. This is really worrying.”

Using the PCN calculator tool on Potato Council’s website, it can be calculated that when there is just one egg/g of soil and a field is planted with the variety Maris Piper in 2014, nematicides are applied (assuming 60% control) and target yield is 50t/h, first year estimated yield would be 48.8t/ha.

Widening the gap further will see a lesser decline in yield and introducing pallida-resistant varieties with the use of nematicides will also help drive down PCN levels.

“Losing yield from growing potatoes on tight rotations will increase costs of production and increase PCN populations and if we are to have a sustainable potato industry, we need to address this problem,” says Mr Sarup.