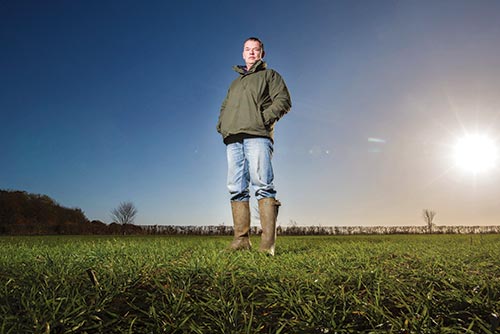 A Lincolnshire grower has achieved the highest potential wheat yield on his land in an ADAS competition. We find out how he extracted the most from his soils.

Robert Pask looks to squeeze the maximum yield from his light, sometimes unresponsive, soils with a drip-feed approach to his wheat growing.

His Lincolnshire limestone brash soils are drought-prone and poor providers of nutrients so he tailors all his field work to feeding the crop gradually through the growing season.

He needs his crop to cope with dry springs on his shallow soils with a high stone content, which can hit tiller survival, while dry summers can kill a crop before it reaches its potential.

“This is easy land to work and establish crops but it is difficult land to take those crops through to a big harvest,” he says.

On his land where wheat rarely reaches bumper yields, this summer he harvested a crop that yielded 69% of its calculated potential.

This was enough to win the highest potential yield category in the ADAS Yield Enhancement Network (YEN) competition with a winter wheat crop yielding 8.21t/ha.

“These soils are poor providers of nutrients so we are looking to feed the crop to meet its demands through the season,” he adds.

Historically, first wheats on his chosen field for the YEN project would have averaged about 7.7t/ha due to drought and low nutrient availability, but he is gradually pushing yields ahead.

He was incorporating straw well before any burning ban and believes that his minimal cultivation establishment methods are helping soil structure.

Mr Pask’s approach at Heydour Lodge Farm, some five miles east of Grantham, south Lincolnshire, is to feed his hungry drought-prone soils to encourage tiller survival to set up crops to cope with a dry summer.

Robert Pask has chosen the feed wheat variety Santiago for this season’s YEN competition and is looking to achieve a yield of more than 10t/ha.

About 70% of the 380ha land he farms is limestone brash, which he crops in a four-year wheat-oilseed rape-wheat-sugar beet rotation.

With an eye on a likely dry spring, he front-loads his fungicide programme for early protection and uses plant growth regulators to boost rooting mass.

His winning crop of the biscuit wheat variety Viscount was grown using a high seed rate to try and counter the expected poor tiller survival in the early spring dry weather.

The crop established well in the autumn and looked well into the new year despite a wet winter and late spring.

He split his phosphate and potash fertiliser applications 40:60 in the seed-bed and then in early spring with his first nitrogen application to prevent lock-up on his alkali soils.

He uses a four-way split of liquid nitrogen, totalling some 220kg/ha, to keep the crop growing for as long as possible over the growing season.

Liquid has the advantage of accuracy and ease when using his self-propelled sprayer; he also feels it suits his dry and hungry soils.

“High pH soils are very reluctant to release nutrients so the little-and-often approach going forward will be the norm,” Mr Pask says.

This year, he moved the SDHI focus of his four-spray fungicide policy earlier in the season for his chosen field using SDHI at the T0 and T1 timings rather than the more conventional T1 and T2.

This was done to keep the crop clean, especially from early septoria, and to give it the best chance for strong growth in the dry spring.

“Our aim is to maximise and maintain green leaf and minimise disease levels,” he says.

His fungicide programme crept over the £100/ha mark, but he says the crop looked full of potential and justified the spend .

Into the T0 and T1 spray treatments in April and May he added the plant growth regulator Tempo, which gave a noticeable boost to rooting and evened out the crop canopy.

“There is not a lodging problem, but we are looking to build a greater rooting mass and give a better evenness of the ears,” he says.

To counter the poor nutrient availability of his soil, trace elements are mixed in with each of the four fungicide sprays, while a trace element seed dressing was also used.

The crop looked full of promise until the T2 spray at the end of May, then June and July’s high temperatures took their toll, which could have taken about 0.5t/ha off the final yield.

“The heat had a clear effect as the crop was not as full of colour and vigour, and the secondary tillers did not give weighty head,” he says.

Harvest was late, as across the country, with the Viscount being the first wheat to be cut on 12 August as it is prone to chitting in the ear, and was sold to breakfast cereal maker Weetabix.

For this season, he has chosen his best limestone brash field with the deepest soil and least stone to chase yield in the competition.

He has opted for the high-yielding feed wheat variety Santiago, drilled in good conditions in mid-September, and is looking for a yield of over 10t/ha.

He has added an extra autumn foliar trace element spray and will also try an extra foliar nitrogen application of 20kg/ha on the ear to help feed the grain and try and promote late development.

Mr Pask says he usually has a couple of trials on his farm to challenge his own practice and seek out better profit margins.

These have included looking at seed rates, trace elements, growth regulators and fungicides and, while some fungicide trials are more expensive, they always return a greater margin.

Of the 30-plus entrants to the YEN competition, the range in yields varied from 13.41t/ha down to 8.21t/ha, with the top yield coming from Norfolk wheat grower Mark Means, who won the best field award.

However, Mr Pask with the lowest yield, produced the highest percentage of his ADAS-calculated potential yield at 69% – a sure sign he is making the best of his biggest natural resources, his soil.


ADAS is running its YEN competition again this current season to drive innovation and continue to encourage growers to get near to their maximum potential yield. For information about registering to enter this season’s competition go to yen.adas.co.uk