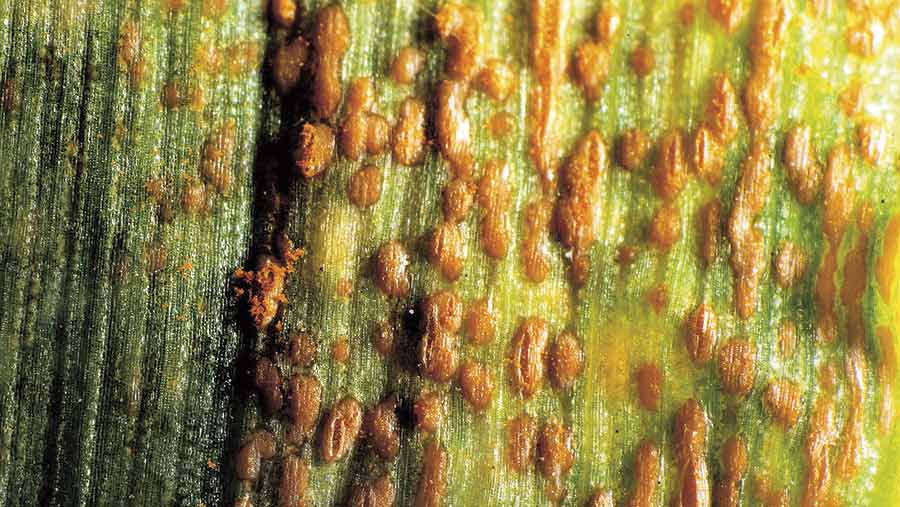 Yellow rust takes its name from the highly visible parallel lines of yellow-orange pustules that are produced along the leaves of adult plants.

The most severe epidemics are usually associated with the perfect storm of very susceptible varieties, mild winters and cool moist summers, with yield losses of 40-50% being recorded where crops do succumb.

The disease, which was known for being sporadic in the UK – occurring more often in the east of the country and in coastal areas – has been seen at much higher levels in the last couple of years.

This surge is believed to be the result of the arrival of new, more aggressive races of yellow rust in the field, which have been able to overcome some of the genetic resistance found in popular varieties.

Experts warn that the fluidity of the situation and the potential for further change from an increasingly diverse pathogen population mean that it is impossible to predict what will happen next.

Already this year, seven popular Group 3 and 4 wheat varieties have seen their disease resistance ratings revised, with most dropping by two points or more.

Against this background, it is essential to monitor crops and report any unexpected findings as the season develops, stress the experts.

As Jonathan Blake, principal research scientist at ADAS points out, yellow rust is a complex and moving scenario, so there will be implications for its management and control.

“The yellow rust situation in the UK is very dynamic,” he says.

“The variety ratings are as accurate as they can be, but don’t assume anything. It takes time to detect and confirm new races, which is why the information we have to work with can seem to be behind what’s happening in the field.”

“With another new race recently detected, it means we can’t rely on the Recommended List disease ratings. The genetic defence against such a mixed rust population is fragile,” he says.

It then appears as distinct “foci” in crops and can be spread long distances by the wind.

Once within plant tissue, yellow rust can survive the coldest of UK winters.

As it warms up in the spring, the fungus starts to grow and produces active sporulating lesions, with the ideal growing conditions being at temperatures of between 8-15C. Cool, damp weather is conducive to its development.

In perfect conditions, the complete cycle from infection to the production of new spores can take as little as seven days. This means that the disease cycle can be repeated many times in one season.

The fungus may be inhibited by temperatures over 20C, although some experts believe that the new strains of yellow rust are tolerant to a wider temperature range.

“There’s every possibility that these new isolates have adaptations to temperature,” says Sarah Holdgate of the UK Cereal Pathogen Virulence Survey, which monitors cereal rusts and mildews in the UK.

“Whether they differ in their aggressiveness is less certain – the jury’s still out on that.

“What we can be sure of is the fact that yellow rust is now so diverse that anything is possible.”

Early sown crops are at greatest risk, as spores spread from previous crops and volunteers in late summer.

Mild winters then increase the risk of the disease overwintering, leading to early infection in the spring. In contrast, a cold winter helps to delay the epidemic, but won’t stop it. 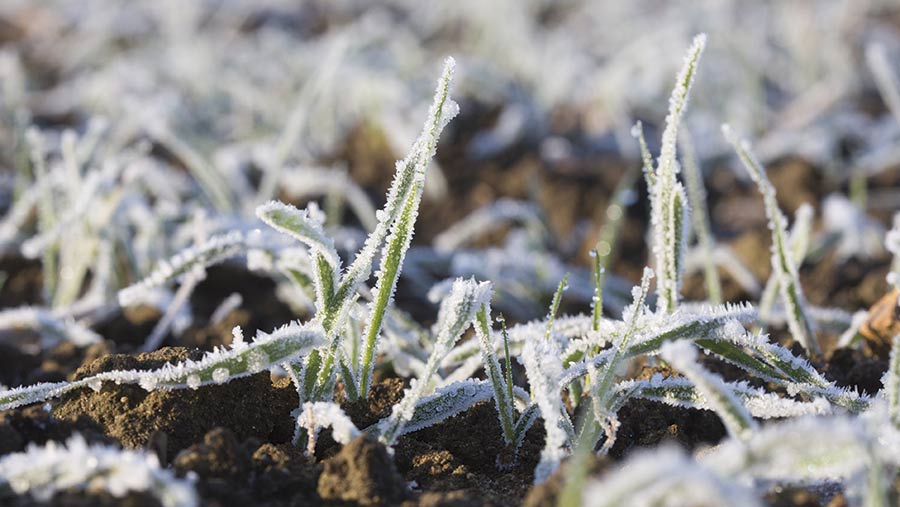 Despite the new races, varietal resistance can still be a useful option in limiting the incidence and spread of yellow rust, forming part of an integrated approach.

Resistance is measured at the seedling stages and also at the adult plant stages – as varieties can be susceptible in the early parts of their life, but resistant at the adult stage.

“It’s the adult stage that really counts, even though it doesn’t kick in until later in the growing season,” comments Dr Holdgate.

In order to alert growers as soon as possible to changes in varietal resistance, her team updates the Recommended List information annually. Samples of yellow rust from throughout the season are analysed, building a picture of the races that are established in the UK.

New races may occur when there is over-reliance on a single resistance gene. They may also arrive into a new area through weather, travel or trade.

Typically, a new race is named after the previously resistant wheat variety on which it was first identified. That’s why the latest discovery has been provisionally named as the “Invicta” race, and follows the discovery of the Kranich race in 2015 and the Warrior race in 2011. 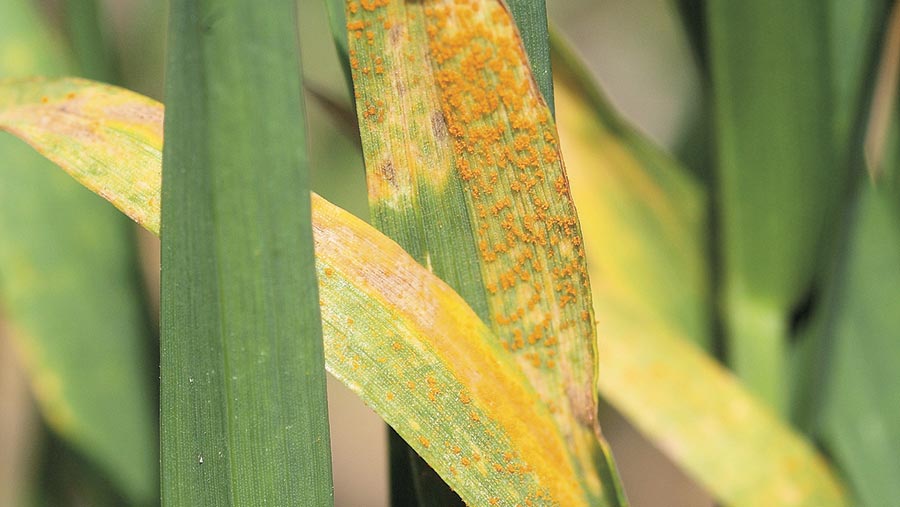 While the Warrior 4 race now dominates in the UK, accounting for around 80% of yellow rust samples, it is becoming more common for multiple races to be present on the same leaf.

What makes the new discoveries different to the older, established races is that they seem to produce more spores and cycle more rapidly when they are in wheat crops, explains Mr Clark.

“They certainly behave more aggressively in the field, producing serious yellow rust. As a result, they push the epidemic more quickly.”

There is a good choice of fungicides for controlling yellow rust, which unlike septoria, includes strobilurins.

In planning their strategy, cereal growers should aim to be one step ahead of the disease, rather than having to react to it.

That means the early spray timings are important, advises Mr Clark, who puts the emphasis on the T0 and T1 sprays, so that the disease doesn’t get the chance to get away. 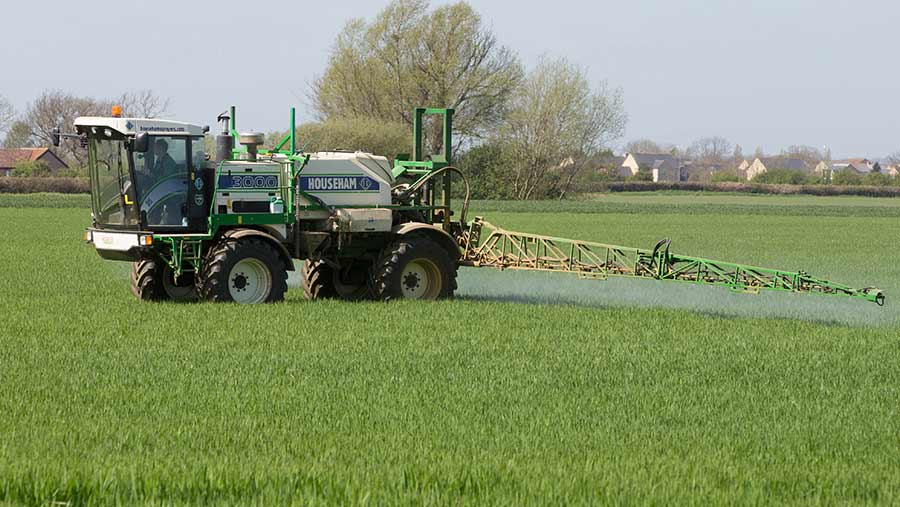 Niab trials have confirmed this timing focus, with a 2t/ha drop in yield being recorded where either the T0 or both the T0 and T1 sprays were omitted, before a “hefty” T2 was applied.

Unfortunately, because having a good resistance rating is no indicator that a variety will remain clean, there will be a need for vigilance as the spring gets underway, warns AICC chairman and independent agronomist Sean Sparling.

He points out that it’s now possible to find yellow rust in varieties such as Skyfall, which previously didn’t carry the disease.

“Don’t assume that the winter will kill yellow rust – unless it’s cold enough to kill the leaf the rust is on, it simply won’t,” he says.

“And don’t go charging in with a very early spray where you do see it. You need active growth before the fungicide will be effective.”

He describes T0 and T1 as the building blocks, with a key T0 decision being whether yellow rust needs prioritising.

“If so, there are choices with fungicides. You could use a strobilurin with some chlorothalonil, to dry out any rust that’s present and get 2-3 weeks protection against both rust and septoria alike, which has worked very well for me.

“Or you might prefer to use an azole/chlorothalonil mix if the yellow rust is established.”

Either way, the chlorothalonil is a vital component in the overall programme and the rates of azole fungicides used must be robust, he advises.

For Mr Blake, the decision on product choice for yellow rust at the early stages is clear.

Where there’s a known yellow rust problem and a 3-4 week delay between the T1 and T2 sprays is likely, there might be a place for a T1.5 treatment, accepts Jonathan Blake of ADAS.

“If you need to prevent leaf 2 infection, then applying an azole could be the right course of action,” he says. “A big gap between T1 and T2 should be avoided, if possible.”

“The best-performing azoles on rust are epoxiconazole, cyproconazole and tebuconazole, which all offer curative activity, so they should be the first choice where yellow rust is active.

“The strobilurins are more protective than curative, but are behind the azoles in terms of performance. They have a place where protection is required.”

They can also be used at T0 to alleviate selection pressure on the azoles – something which is recommended in Ireland, where septoria pressure is so high, he reports.

The SDHIs will add to yellow rust control, but are not enough on their own, adds Mr Blake. “They’re less effective on yellow rust than they are on brown rust.”

By the time you get to the T2 spray, there will be yellow rust activity provided by an SDHI/azole combination, which is a fairly standard treatment at that stage, notes Mr Sparling.

“What’s important is that you are using a robust rate of azoles, with 80% being the minimum. This, along with good spray timing, are essential.”