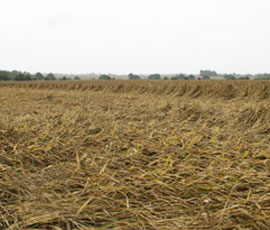 Take care not to overdo plant growth regulators on shorter varieties in a dry year, warns one agronomist.

In trials on chalk in Hampshire last year, NIAB TAG head of technical services Ben Freer found that the use of a belt and braces Moddus/Terpal-based plant growth regulation programme on the short, stiff variety Grafton cut yields by up to 0.9t/ha.

“So, while there is undoubtedly benefits to be had in terms of lodging control on taller, weaker strawed varieties in a wet year, growers do need to be careful on shorter varieties in a dry April/May,” he says.

“The Hampshire site was on droughty chalk, so the Grafton was probably under additional stress, hence the extreme check in yield.”

Mr Freer’s advice for this season is to assess your lodging risks across all varieties over the next week or so and be prepared to change plans when it comes to later season sprays according to prevailing conditions.

Highest risks are in taller, weaker varieties sown early, in fertile situations, on soils that are moisture retentive. Here there is no doubt that a full PGR programme is beneficial.