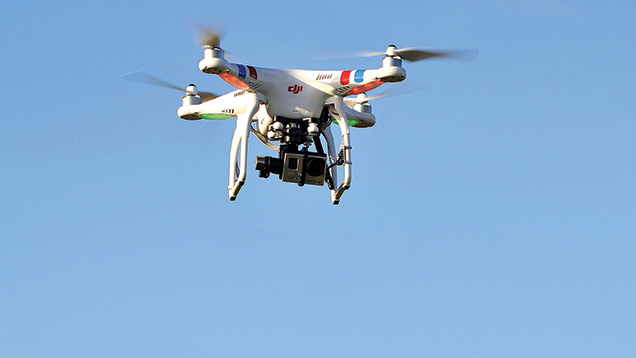 Future technology such as robots and drones offer huge benefits to growers, including better crop monitoring and a 90% saving in pesticide use through more targeted applications.

However, this technology won’t replace agronomists, who will continue to have a pivotal role in helping growers get the most from this precision and smart farming technology.

In a dedicated session at the recent AICC conference, agronomists considered the usefulness of current and future precision farming tools to farm businesses, as well as their ability to support the provision of more detailed agronomic advice.

And although the new developments – including robots, automation and drones – will allow greater crop interrogation and more intelligent targeting of farm inputs, they will all need expert agronomy support, the speakers stressed.

As Sam Wane, senior lecturer in mechatronics at Harper Adams University, explained, farming with robots may help to complete complex operations and remove the existing constraints of machinery, but it will always need human supervision.

For independent agronomist James Rimmer, who is also farms director at Broad Steam Farming in Kent, there are some very exciting developments in the pipeline.

An early adopter of precision farming on the 1,280ha of combinable crops he oversees from the business’s Romney Marsh base, Mr Rimmer pointed to the efficiency and accuracy benefits he had been able to achieve to date.

“There’s always been very little scientific evidence to support a yield response from precision farming,” he said. “But there are savings in time and fuel, as well as more targeted use of inputs, by dealing with inherent variability.”

Having started with soil scanning and variable rate P,K and lime applications in 2002, he has since progressed to include yield mapping, variable rate nitrogen and RTK GPS guidance. Variable seed rates were experimented with for three years, but have since been abandoned.

“It’s important to get a balance between time, cost and value,” he continued. “It’s no longer as expensive as it was, but there are some situations where it is very difficult to justify.”

Looking ahead, Mr Rimmer sees enormous potential in the techniques that will allow reductions in the use of agrochemicals.

“Developments such as crop scouting, weed detection, micro-spraying and laser weeding are all of interest. Reducing herbicide use by over 90% is a real possibility with these.”

As a result, if the prototypes are successful and the technology is affordable, he believed that it will find a place.

“It will have to be cost-effective,” he pointed out. “And it will also have to meet the original objectives that were set on the farm.”

“We will get to the stage where a farmer can send robotic tractors into a specific area of the farm, to do some of the very difficult, expensive or time-consuming tasks,” he said.

“But people will always be in that loop, in a supervisory or expert capacity.”

There are four stages where new technology can potentially be used, he added.

“It has a role in crop establishment, crop scouting, crop care and selective harvesting. So it means that a whole new generation of machinery based on plant needs will be developed.”

These “smart” machines will be small and very light, so that they can work in a whole range of conditions, without causing soil compaction, he explained.

“They can also be programmed to work when the conditions are suitable – for example, to continue spraying when the wind dies down.”

Mr Wane gave an example of a robotic seed drill, which was so light that it could work in any weather, regardless of soil type and ground conditions.

“It also would have highly accurate seed placement, be able to cultivate for each individual seed position as well as vary seed depth according to moisture.”

Similarly, selective harvesting technology would include harvesters that would only select mature plants, leaving those that weren’t ready, but remembering where they were for future operations. “It could grade in the field too.”

But he highlighted crop scouting as the most relevant development for agronomists. “This technology would work with agronomists by giving near real-time data over the whole farm.”

Unmanned ground vehicles (UGVs) could be used in crop trials, for phenotyping and targeted agronomic measurement, while unmanned aerial vehicles (UAVs) would provide rapid assessments of both visible and non-visible crop parameters, he pointed out.

“Crop scouting would allow agronomists to cover a greater area, or give a more detailed service, or both,” he said.

The future for weed control

Micro spraying and laser weeding both offer potential for reducing herbicide use and improving the targeting of sprays, noted Mr Wane.

With micro spraying, a seed map gives the initial guidance points, he explained.

“Weed detection technology then recognises weeds growing close to the crop area, so that they can be micro-sprayed without having to treat the whole field. It saves over 90% of the herbicide.”

Laser weeding, which is currently in development at Harper Adams University with funding from an agrochemical manufacturer, uses machine vision to recognise the growing point of the weed.

“A laser then kills the weed, by heating the growing point and causing the cell walls to burst. There’s no need for herbicide at all,” he said.