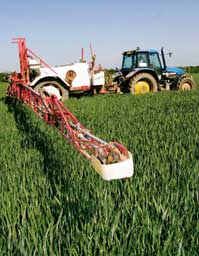 Second generation SDHI fungicides will make their debut in wheat this season. Mike Abram runs through what you need to know

Q. Which products have been launched?

Syngenta is also planning to launch a wheat version of its isopyrazam SDHI fungicide, approval permitting. That will be co-formulated with epoxiconazole, and sit alongside last year’s introduction, Bontima, which contains isopyrazam + cyprodinil.

Q. Why the excitement?

A. The second generation SDHIs have been likened to having the impact of strobilurin fungicides when they were first launched. For example, yield responses in wheat trials with a full rate of Aviator Xpro averaged 0.6t/ha over current standards in 2008 and 2009. In barley Siltra Xpro yielded 0.25t/ha more than Fandango on average in the same years.

Q. What drives those yield responses?

Syngenta says isopyrazam is as active against septoria as any other SDHI in trials, and that its combination with epoxiconazole represents a “step forward” in septoria control compared with current standards.

The new generation also offers a degree of curative control against septoria. It isn’t enough to simply replace triazole fungicides, but the combination of SDHI and azole will provide as good as curative activity as you could hope to achieve.

Q. What about other wheat diseases?

A. Both firms are claiming excellent activity against rusts. Bayer says its product will keep brown rust off for the season from a T2 spray, and will keep yellow rust at bay provided an adequate T0/T1 programme has already been applied.

Syngenta suggests rust is where its wheat product might have an edge over its rivals. The firm’s David Ranner says isopyrazam has given better performance than Opus in the majority of trials against brown rust, and is class-leading against yellow rust.

That assessment, however, has been made on the basis of comparing Syngenta-made formulations of each new SDHI active ingredient rather than the ones the actual manufacturer uses.

A. Because Bayer, for example, has spent millions developing a formulation, which it says is crucial to obtaining the benefits from the product. It has coined the name “Leafshield” to describe the formulation, which contains three specifically designed adjuvants to optimise performance. 80% of the components in the formulation have been invented by Bayer, the firm’s Alison Daniels says.

The adjuvants have three roles: To increase spray adhesion and crop coverage, which results in greater efficacy and spray flexibility; to create a weather-resistant active ingredient reservoir for long-lasting protection and sustained curative activity; and to enhance active ingredient transfer into the leaf or fungus? giving systemic activity for curative disease control.

It means the product is remarkably consistent whatever the weather, Dr Daniels says. In addition, rainfastness is incredibly quick – in fact it is too rapid for the traditional test to assess. “Our chemists believe it is rainfast as soon as the solvent evaporates.”

Syngenta also puts a lot of store in its formulation and, what it terms, the double-binding characteristics of isopyrazam.

Those relate to the active ingredients’ structure, which in addition to having pyrazole ring common to all SDHI active ingredients, also has a benzonorbene ring, which ultimately underpins its field performance, the firm’s Jez Godwin says.

“There are two parts to the double-binding technology. First it means the product strongly binds to the target fungus, which means it is extremely potent against the fungal disease, and second it has a strong affinity for the wax layer of the leaf, which provides a protective shield to stop infection by disease.”

That affinity for the wax layer also helps explain the product’s excellent rainfastness, he says.

Q. When should I use these new products?

A. Both firms are targeting the new wheat products firmly at the T2 flag leaf market. Neither is particularly systemic, meaning they won’t move to new growth, but they are long-lasting and give excellent disease control.

At T2 the canopy is complete, and growers can take advantage of the long-lasting disease control. The top leaf layer is also crucial to protect in wheat, contributing the largest amount to yield.

Neither firm is particularly pushing growers to use the product at T1, although in high early septoria pressure situations there could be a case for considering it. However, neither has much eyespot activity, and if that is a strong driver at that timing, another option could be better.

Fusarium is another disease the new actives are not strong against; meaning T3 isn’t a strong position. However, the long-lasting protection against foliar diseases could allow a change of emphasis with T3 sprays towards specific ear diseases.

Q. What rate should I use?

A. Both firms are suggesting that a minimum 75% dose is required to achieve the yield advantages over existing chemistry. For Aviator Xpro that means 1.0 litre/ha, while it would be 0.75 litres/ha for the isopyrazam + epoxiconazole product, if approved.

The trials data both firms have collected over the past three seasons does back that assertion, with strong dose responses evident.

Q. Where should I switch?

A. High disease pressure situations, particularly septoria, would be a clear reason to switch a flag leaf spray into the new chemistry. In 2008, the last high pressure season, both firms were seeing high yield responses from the new chemistry over existing standards, sometimes of over 1t/ha.

In the lower disease years of 2009 and 2010 responses were less clear cut. Hutchison trials, for example, found average yield increases of 0.5t/ha in 2009, and responses ranging from nothing to 0.3t/ha last season.

But Bayer CropScience has also done some interesting analysis of around 40 trials from those three seasons looking specifically at site yield potential. That shows that trials sites where the treated yield exceeded 9.5t/ha produced a yield response of 0.45t/ha to the new chemistry over current standards, compared with just 0.08t/ha where treated yields were under 8t/ha.

Septoria pressure, on average, was relatively similar over across low, medium and high yielding sites, which, Bayer’s James Taylor-Alford suggests could mean that something else other than disease control could be contributing.

Q. Oh no! Not the infamous physiological, greening, responses again?

A. Yes, afraid so. The University of Bonn has done research for Bayer which found that Xpro had 11 times the amount of chlorophyll in the flag leaf at GS85 in disease-free plants compared with the untreated. That compared with just twice the amount of chlorophyll in the leaves treated with prothioconazole or boscalid. The researchers also found the length and width of the Xpro treated flag leaves was more.

There is also some evidence of better nitrogen utilisation as has been found with the strobilurins, and that bixafen stimulates photosynthesis, and increases drought tolerance.

Q. So the products sound incredible. How much do they cost?

A. Obviously they don’t come cheap. Finding new active ingredients is much more difficult under the current regulatory climate, and, according to Bayer’s Steve Patterson, they cost around £270m to bring to market, 14 times more per active than 20 years ago.

And with the benefits the manufacturers are claiming, they believe they have products which are worth a premium over existing standards. So, expect to pay at least £6-8/ha more for a three-quarter dose of Aviator Xpro compared with the 75% dose of triazole plus 80g/ha of strobilurin you might have been using at T2 previously. Based on last year’s pricing for that mix, it means you could end up shelling out at least £36/ha.

Syngenta has not released pricing for its new wheat product, but, assuming approval is given, expect to pay a similar amount.

Q. Is that good value?

A. With wheat prices at record highs, the manufacturers could hardly have picked a better season to introduce new chemistry. Pushing crops hard to maximise yields will increase returns, and the yield responses required to pay for more costly chemistry decrease at high commodity prices.

For example, if you achieve the 0.4t/ha average yield response from the 1.0 litre/ha rate of Aviator Xpro over current standards, you can expect an extra £50/ha return, if you’ve sold wheat at £150/t.

Where it gets a little trickier is in a low disease year, or on low yield potential land, where the extra yield boost in trials have been lower. If that yield response is only 0.1t/ha, and possibly combined with your current treatment being less expensive thereby increasing the premium you’re paying, then the extra return is likely to be marginal.