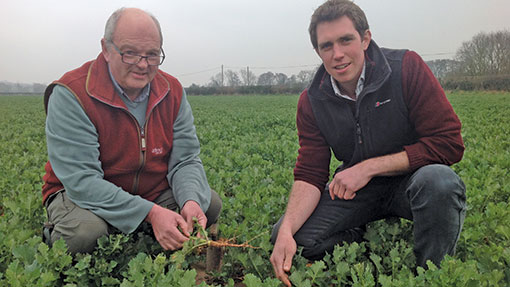 Smartphone technology is evolving rapidly and growers are reaping the rewards. Luke Casswell spoke to one in Herefordshire who is using free technology to boost yields on his farm

It’s cheap, easy to use and can help boost yields. Jack Hopkins is using a canopy management tool on his phone to help even out any variability on his oilseed rape crops and target his fertiliser programme.

In the lush Herefordshire landscape where rolling hills are filled with fruit growing and livestock rearing, producing arable crops is not always straightforward.

The silt clay loams that Lower Hope Farm is based on can see huge variations in crops, which combined with relatively small field sizes, means management is a completely different ball to game to those further east.

The app assistant farm manager Hopkins uses to on his smartphone helps counter these disadvantages by taking a picture of the crop and measuring the green area index (GAI), which can then be used to calculate fertiliser rates.

See also Treat oilseed rape like wheat when it flowers

In February, Mr Hopkins took three to four pictures in each of his oilseed rape field depending on their variability and the size, and plans to do the same again before stem extension.

The benefits of going on second time mean growers can account for any pest damage or colder weather which may have reduced the GAI and would mean making a few alterations to the program.

“It’s very easy to use, and you can simply record each result on the app. This will have all the details of the different points you took it and the field name, then once you are back to the yard you can review it and make your decision,” he says.

Growers are also able to email data back to themselves from the field in order to keep records of their findings.

“It would be useful to have something more advanced like the Yara N-sensor and soil mapping, but this seems a really cheap effective way of doing it,” Mr Hopkins adds.

An average field size of 6ha and rape yield of 3.7t/ha has given Mr Hopkins some different challenges on the farm, which includes in total 480ha of arable cropping some 11 miles south of Leominster.

“We are trying to boost the yields on some tricky OSR land. We’ve peaked at 4.6t/ha but in general it is not a high yielding farm so you have to look at your inputs,” he says.

Mr Hopkins is hoping to keep records from using BASF’s total oilseed app each year from the results in order to build up a better picture of his farm and what drilling dates and nitrogen rates work most effectively.

“It will hopefully give us a good benchmark and ultimately help us optimise our yields,” he says.

His aim now is to get an even coverage of GAI’s of 3.5 by early spring. Working alongside ProCam agronomist John Rossiter, he will apply nitrogen between 45kg/ha to 175kg/ha depending on whether the crops are backward or forward.

“We will probably delay the first application on the very forward crops and then have to re-assess the situation when it come to the final application,” he says.

Another change to his oilseed rape management this year will see Mr Hopkins forgo his usual application of ammonium sulphate in favour of straight nitrogen to boost the GAI to the target of 3.5.

“As long as you have got your sulphur on before yellow bud crop you will still get the benefit from it. We haven’t got drastically low sulphur indices around here but it plays an important role in our oilseed rape,” he says.

Recent wet weather may also have triggered a decrease in the amount of nitrogen and sulphur in the soil, increasing the importance of applications.

“We try and soil test as much as we can and my aim is to soil map the whole farm to help improve our soils,” he says.

The oilseed rape was drilled between 25 August and 8 September, and Mr Hopkins is delighted with how the majority of his crops look.

“There is only one field that’s maybe slightly disappointing but roll clocks back to this time last year and there is no comparison. We’re currently growing PR46W21, Troy, Vision and Extrovert, and the Extrovert in particular is looking very good,” he says.

An app for disease

The BASF app, which is currently only available on the iPhone, can also be used to monitor one of the most damaging diseases for oilseed rape growers in the West – sclerotinia. 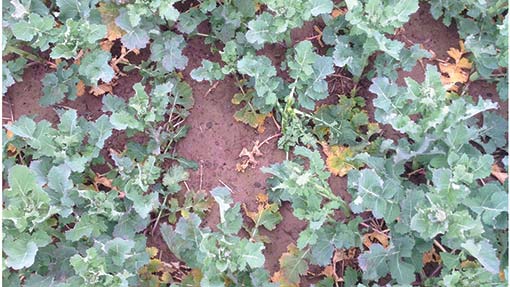 In the joint monitoring service from ADAS/BASF, growers receive a local colour-coded outlook and regional guidance based on the likelihood of sclerotinia germination.

Mr Rossiter admits that such is the severity of the problem that they rarely take any chances with the disease.

“We normally go with fairly robust rates anyway so our control is not usually dictated by forecasts, however it is always useful to have as much knowledge on it as possible. The first spray is critical and then you need to get on around three weeks after that,” he says.

Even varieties that have a good sclerotinia resistance rating should not be forgotten about when planning your programme.

“It may give you a bit of flexibility so you can focus on the areas or varieties most at risk but you will still have to go on with a spray. I am definitely not going to miss it out,” Mr Rossiter says.

“The first spray all depends on when the crop is going to flower, but it is normally April time so you can use a number of things to help make this decision, including the app,” he says.

The disease which can cause up to 60% yield loss per plant in the wetter west and growers normally undertakes a two-spray programme in the Herefordshire region.

“You don’t want to be caught out by the disease. If you find any signs of infection you are probably too late,” he explains.

Growers need to start thinking about treatments at yellow bud time, just as it’s about to come into flower.

This season Mr Rossiter will be focusing his sclerotinia sprays around prothioconazole (Proline), which gives good control and reasonable yield response and also metconazole (Tectura).