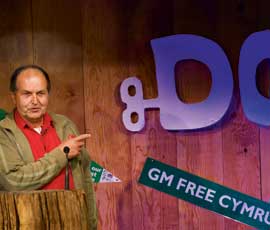 A Welsh farmer says he is willing to risk being arrested when he joins a group of activists at a protest near Luton aimed at destroying a trial crop of genetically-modified wheat.

Gerald Miles, a critic of GM crops since trial plots were planted near his organic farm in Pembrokeshire in 2001, said stopping the trial at Rothamsted Research had to be a priority.

“I would rather not risk being arrested, but myself and others are being forced to take that risk because we have no other means of preventing this crop from contaminating other crops and spreading across the country,” said Mr Miles.

He described the trial as irresponsible and insisted it should have taken place in a controlled environment. “This is an open field trial and there is a big risk of contamination with couch grass. It is only 50 metres from the oldest grass meadow in the UK and is the same distance from a conventional wheat crop. There is a certainty of contamination as has been demonstrated in other countries.”

On Radio 4’s Today programme, the scientist leading the research, Professor John Pickett, made a direct plea to Mr Miles to not destroy the crop.

Prof Pickett defended the experiment, insisting that procedures had been followed to ensure that the GM crops could not escape.

But Mr Miles remains firm in his determination to join other protesters at the trial site on 27 May. “Professor Pickett should not be putting us in this position. If he had first conducted a risk assessment he would have known that he should not have planted this crop.”

Mr Miles, who rears livestock and grows organic crops on 120 acres of coastal land near St Davids, did not deny that research should be conducted into the genetic modification of crops. But he said strict controls should be put in place first. “The science should be researched, but there should be strict legislation to keep these crops in controlled and confined areas.”