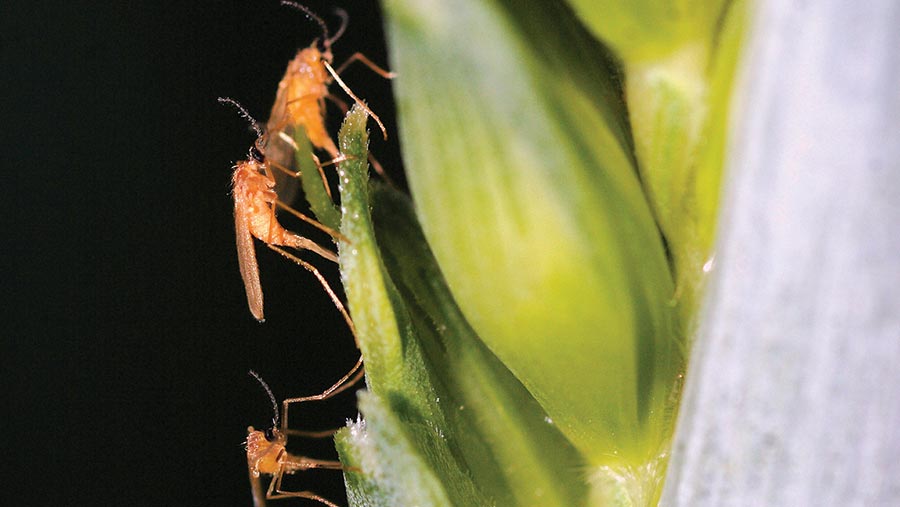 The loss of key insecticide chlorpyrifos means cereal growers are facing an uphill struggle to protect cereal crops from wheat bulb fly and orange blossom midge this season, and beyond.

Earlier this month the withdrawal of products containing the chlorpyrifos active ingredient, which includes Dursban, Pryinex and Ballad, was announced by the Health and Safety Executive (HSE).

It means the use of products containing the active will be limited to a protected brassica seedling drench treatment from 1 April.

Lincolnshire-based AICC agronomist Sean Sparling tells Farmers Weekly he hasn’t been a big user of chlorpyrifos in the past, but is disappointed by the manner and speed of its withdrawal.

“I am also disappointed it has been taken away despite regulators saying we wouldn’t lose actives unless there was something equally as good to use in its place,” he adds.

Preventative seed treatments are now the only chemical tool against wheat bulb fly and Mr Sparling believes there will be more prophylactic use of these treatments without chlorpyrifos to fall back on.

The pest attacks plant tillers at the base of the stem, causing the classic “deadheart” symptoms as the tiller dies, bringing the potential for significant yield losses.

Late-drilled and poorly tillered cereal crops are most at risk. Mr Sparling recommends getting out and applying early nitrogen to these crops at the first opportunity to encourage tillering.

This can be combined with rolling as soon as soils allow and a split rate of a plant growth regulator, such as chlormequat, will further enhance tillering.

“Recent frosts will have triggered egg hatch, so if you have any high-risk fields and chlorpyrifos in stock, you could spray, but ensure all stewardship guidelines are followed,” says Mr Sparling.

For orange wheat blossom midge, growers are now left with pyrethroid and neonicotinoid sprays in their arsenal.

Adas entomologist Steve Ellis says spray timing will be more critical than ever before to get good levels of control.

“You will be able to get similar levels of control to clorpyrifos when using a pyrethroid spray, but the timing will need to be perfect.

“The advantage of Dursban was that it killed the adults and the eggs,” he explains.

“Biscaya will have some activity against the eggs, but not at the level of chlorpyrifos. It does, however, offer much greater efficacy than pyrethroids and potentially more importantly, better flexibility, as you need to get the timing spot on with pyrethroids.”

Wet conditions with soil temperatures at 13C will cause orange wheat blossom midge larvae to emerge and pupate.

“If you suddenly get a large increase in the number of adults found in the traps around the critical risk period, you will need to spray,” he adds.