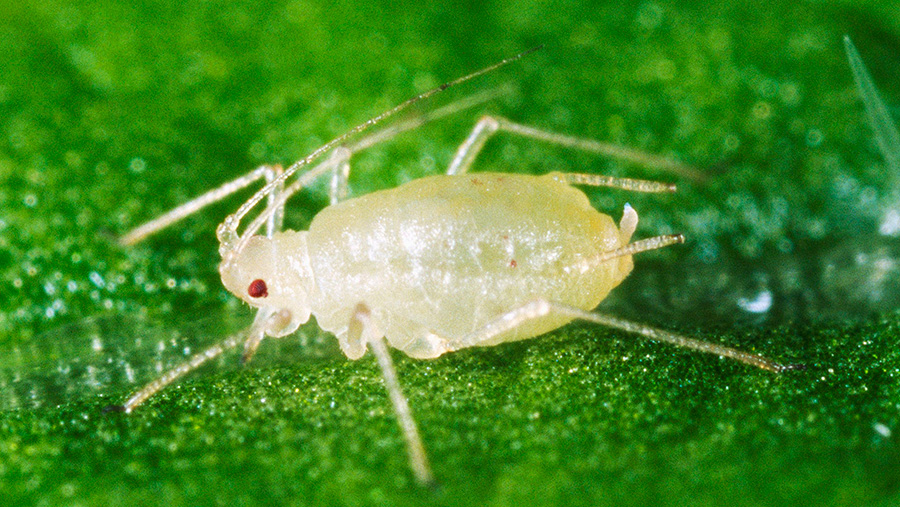 Oilseed rape growers should be monitoring their crops this autumn for virus-carrying aphids and treat if necessary to control the yield-sapping disease turnip yellows virus.

The disease, spread by peach potato aphids, is becoming more prevalent due to rising insect activity while the number of insecticides capable of control them has declined.

A recent survey showed that 63% of oilseed rape crops in England and some 32% in Scotland showed some infection from the disease.

This is a result of aphids developing resistance to once commonly used products, such as the pyrethroids and pirimicarb, and neonicotinoids seed dressings being banned.

Products such as pymetrozine and thiacloprid do have approval for use in autumn to control aphids on oilseed rape, with both being effective against resistant populations.

“There are no cheap and cheerful options for controlling aphids anymore and most are contact-acting, so aphids have to be present for them to work effectively,” said  David Ellerton, technical director at agronomy group Hutchinsons.

He recommends growers monitor aphid activity using services such as the AHDB/Rothamsted alerts.

The addition of an adjuvant based on orange oil –an essential oil produced within the cells of an orange’s rind – will improve aphid control and lead to reduced infection rates, he added.

Meanwhile, out in the field, virus spreading aphids are being seen in crops in several parts of England.

There is currently no threshold for Myzus aphids in osr. But if one did exist, this would be well above it #osr #aphids #TuYV pic.twitter.com/YqiN9may5e