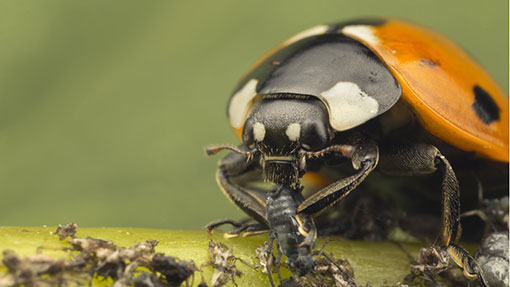 Aphids are starting to fly earlier and in greater numbers than normal this season, putting spring-sown crops at the biggest risk of damage.

Crops such as potatoes, peas and beans, and other field vegetables are expected to be the most under threat after a mild winter and warm spring.

“This year spring crops are more at risk than autumn-sown ones,” said Richard Harrington, head of the insect survey team at Rothamsted Research.

This big aphid year is likely to lead to damage from direct feeding and virus spread, especially on vegetable crops rather than cereals.

Dr Harrington added that last winter was the fourth mildest since Rothamsted aphid suction trap records began in 1965, which helped to aid aphid survival through the winter.

However, the early aphid flying season is not expected to lead to a big risk of damage to cereal crops this summer.

This is because the mild winter and warm spring will have also encouraged aphid’s natural predators, such as ladybirds and parasitic wasps, which are building up numbers for when cereals ears appear and when the crop is most at risk.

“We do not see such as big risk this year to cereal crops,” he said at a cereal aphids briefing organised by Bayer CropScience.

The risk to cereal crops is usually bigger after a harsh winter as predators often starve in the absence of aphids, while these aphids can recover in numbers more quickly than their predators.

Therefore, the cold winter of 2012-13 has limited the severity of BYDV this season to well below the big disease year in 2012.

But if this summer is wet – which encourages a green bridge between crops to aid aphid survival – and this is followed by a mild winter, then BYDV may well be a problem for harvest 2015 crops.

Will Foss, agronomist at distributor Agrii, said the BYDV risk is higher on early drilled cereal crops in warm sheltered areas and in a prolonged mild autumn.

The disease can cut winter barley yields by up to 75% and winter wheat yields by up to 30% with infection largely coming from disease-carrying aphids in the autumn, he added.

An insecticide cereal seed dressing, such as Redigo Deter, will give control for six to 12 weeks depending on the seed rate and drilling date, and then control can be topped up by use of a pyrethroid spray.

Mr Foss said if this neonicotinoid was lost as a cereal seed dressing, as these chemicals have been banned by the European Union for use on oilseed rape seed, then it would be a real problem and growers would be very reliant on pyrethroids.

Aphid resistance to pyrethroids was first detected in the English grain aphid (Sitobion avenae) in the summer of 2011, and resistance could spread to other cereal aphids such as the rose-grain aphid and the bird cherry-oat aphid.

“Growers should not reduce rates. Keep rates up for the best resistance management strategy,” said Dr Foster, who leads work on aphid resistance at Rothamsted.