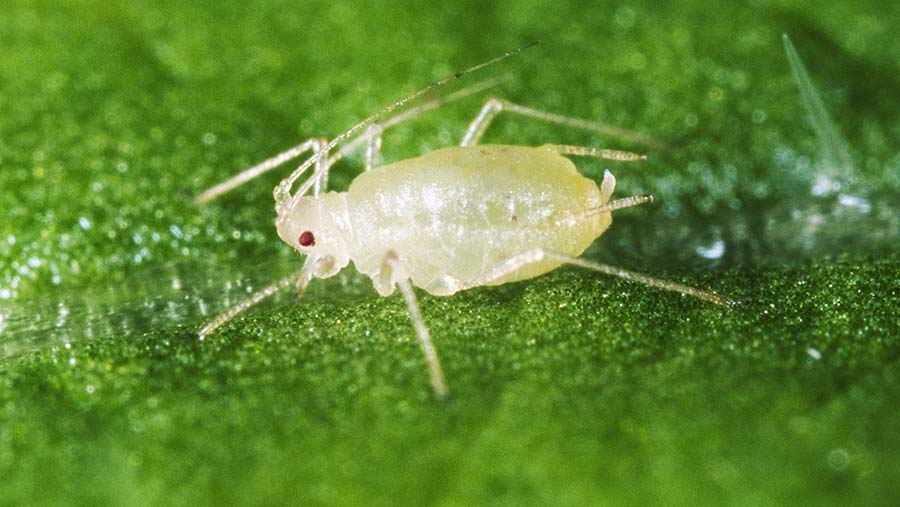 Growers could be caught napping after aphids started to arrive in cereal and oilseed rape crops several weeks earlier than initially forecast.

Delayed drilling of some spring cereals crops because of soggy soil conditions will likely result in later emergence, with seedlings facing a greater risk of aphid-transmitted diseases such as barley yellow dwarf virus (BYDV).

Meanwhile, oilseed rape growers and agronomists are reporting large numbers of mealy cabbage aphids in crops, particularly in the South West and Midlands.

The latest update from the AHDB’s aphid news service says aphids are now easily found in winter cereals in southern parts of England, with BYDV infection suspected in both winter wheat and barley in the South and West.

Bird cherry-oat aphids are being found in suction traps right across the UK and the grain aphid has made its first appearance in 2016 after it was recorded in Herefordshire.

Slightly suprised to see these mealy #aphids on the #OSR this morning pic.twitter.com/bmWaCT48Vq

Lots of these about on cereal crops too. Rose grain aphid pic.twitter.com/3220faHkeE

Aphids on wheat. 1-2 per plant. pic.twitter.com/nbG7NjaKOq

Finding aphids too easily in end Sept planted wheat which has had deter and a follow up pyrethroid pic.twitter.com/wENOOlbWuF