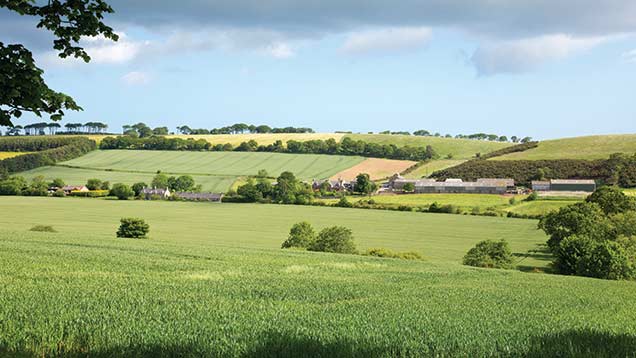 A large arable farm in Berwickshire, near Coldingham, will tick a lot of boxes for many buyers, according to Luke French from Savills.

Modern grain buildings offer 4,500t of storage, while other buildings include four high-quality holiday cottages and a period farmhouse. A biomass boiler supplies a district heating system, while a 200kW wind turbine, which earns about £130,000/year, is available by separate negotiation. Press Mains is on the market at offers in excess of £7m. (Savills 0131 247 3723)

Three productive blocks of arable land are bringing more than 300 acres to the Stirlingshire and Fife market. The largest is 150 acres at Dales and Sunnybank, north of Inverkeithing.

The Grade 2 and 3 land has produced good oilseed rape and potato yields, but is now in cereals. It is for sale at offers in excess of £1.09m as a whole, or in six lots.

Near Stirling, 60 acres of land at Mid-Lecropt is for sale at offers over £240,000. The level Grade 3 soils are down to temporary grass, but have been part of a cereals rotation.

The Scottish market also offers a West Lothian stock farm with 137 acres of grazing and silage ground at offers exceeding £730,000.

Loanhead Farm at West Calder has buildings and cattle-handling facilities to support a beef and sheep business, but has diversified to act as a haulage centre for articulated lorries. Wood from the farm’s beech trees is also sold as part of a profitable wood fuel business. (CKD Galbraith 01786 434600)