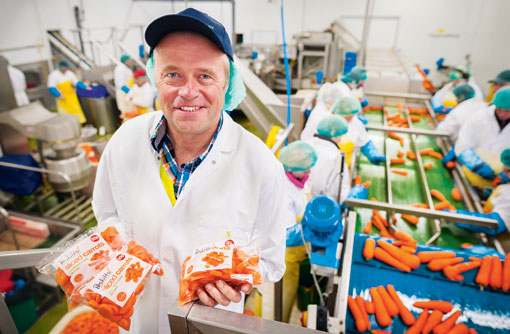 All three finalists started out from humble beginnings and have built up profitable arable enterprises. The key to their success has been a focus on costs and identifying a gap in the market, such as offering a premium seed potato service or establishing their own-brand new potatoes or mini-carrots. Richard Allison reports


Guy Poskitt is no stranger to potato and carrot growing, but he is also passionate about combinable crops, which have a vital role in his arable business.

Over the years, he has transformed the family arable farm into a major vegetable supplier to Asda and he is one of the retailer’s biggest suppliers of carrots, as well as supplying parsnips and swede. Guy also sells into the food service, wholesale and food manufacturing sectors.

It started as a small operation with carrots washed in a farm shed. Today the firm employs 220 and its packhouse is capable of washing up to 300t/day of veg.


But he still sees himself as a farmer, giving him an edge over his competitors. “This is how we differentiate ourselves from other packers and growers.”


To extend the season, he grows and has growers in Scotland, Lancashire and the south of England. “This also helps to spread risk in very wet or dry seasons.”

Recent years have seen the arable part of the business grow. “We have expanded the combinables as a proportion of the total area, which now includes nearly 800ha of wheat. “We have also increased our sugar beet area to 200ha.

“Without the arable business, our vegetable side could not function. It has been essential to the growth of the business so we could maintain the rotation.”

For example, carrots require a one-in-seven-year rotation to be sustainable.


This is partly due to the loss of key actives in recent years for controlling disease.

On top of this, combinable crops help spread the financial risk. In contrast with the vegetable sector, crops can be sold forward, bringing some certainty, he says. About 40% is forward-sold to local feed mills.

Guy continually looks at adding value. For example, reject carrots used to be sold to local farmers as stock feed. But he is now processing and selling them as prepared, ready-to-cook batons.

And the shavings produced making batons are sold to a soup manufacturer.


“It’s like a pig, you have to utilise the whole product.

“It’s all about getting the most out of the crop. You have to be smarter in what you do, as the veg business is not inflationary.”

In the past six months, Guy launched Poskitts Mini Peeled Carrots, one of the first farmer-branded carrots, and is now selling in Asda. The packaging directs consumers to Guy’s website, where they can find out more about how the carrots are produced.

Getting the most out of crops also applies to his other crops. He has increased sugar beet yields to 80t/ha by adopting a multiple fungicide strategy to maintain green leaf in the autumn. Wheat averages at 8.3t/ha and oilseed rape at 4.88t/ha with the highest yields approaching 12t/ha for a crop of Grafton and 6.4t/ha for Excalibur OSR.


He uses the Soyl mapping system for matching P and K fertiliser applications with crop requirements. “This led to a 15% reduction in the first year. We also saw a 5% reduction with nitrogen when adopting the N Sensor.”

He is also looking to reduce pesticide use by working with Garford in developing a prototype vision-guided band sprayer to target weeds with glyphosate. “We hope to use one-third less spray, reducing pesticide use.”

Similarly, he is examining ways of removing the use of Vydate from potato and carrot growing. A trap crop is being successfully used to tackle potato cyst nematode populations with bramble weed (Solanum sisymbrifolium).

Guy takes pride in conservation, with many species of birds seen on his farm, and has taken measures to cut carbon, including recycling straw for protecting carrots over winter and cutting fuel use.

“We are also looking at investing in a grain store with solar PV panels as we could use the green energy to remove the last few percentages of moisture.”

British Sugar produces over 1m tonnes of sugar from the 8m tonnes of sugar beet grown in the UK by 4,000 farmers. The industry is dedicated to maximising the production of the crop as well as the four sugar factories to enable a sustainable future.”