A fourth agricultural revolution is in full swing and growers are on the brink of reaping some significant benefits, with robots and other automated technologies set to significantly boost productivity.

Three food production game-changers have been seen throughout history so far, with a switch from hunter-gatherer to stationary agricultural production in about 10,000BC the first and most fundamental.

In the 1700s, the introduction of more diverse crop rotations, horse-drawn implements and land reforms led to food production growing at a staggering rate.

See also: Arable Horizons: How science and technology could save our soils

More recently, the “Green Revolution” was fuelled by advances in plant breeding and increased mechanisation, and the introduction of synthetic fertiliser and pesticides doubled cereal yields in developed countries between the 1960s and 1980s.

While it’s unlikely there will ever be such yield advancements over a similar period again, Simon Pearson, director of the Lincoln Institute of Agri Food Technology, believes the next agricultural revolution is here – digital technology to increase productivity.

Profitability is one of the biggest challenges facing UK farmers. Prof Pearson points to the latest Farm Business Survey, which shows that without support from Brussels, many farm businesses wouldn’t survive.

During harvest 2015, for example, some growers’ costs to produce a tonne of wheat was an unsustainable £250/t. The survey also showed 50% of UK farm businesses had an unprofitable main enterprise.

“Is yield going to get us out of this predicament? It may do, but if you’re a betting person, you’ve really got to place your money on driving productivity, as history is dictating there is a yield plateau,” says Prof Pearson.

The tools to help are beginning to trickle through and, in the short term, University of Lincoln robotics expert Tom Duckett believes it will be autonomous technology fitted to farm machinery in its current guise that will initially appear on farm. 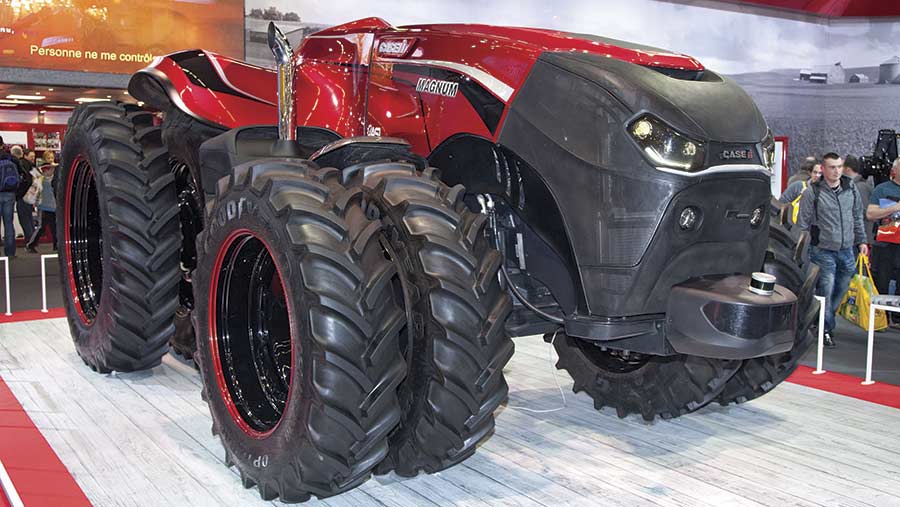 Examples would include Case IH’s driverless tractor and the “Hand Free Hectare” project at Harper Adams University, where engineers have adapted an Iseki tractor to carry out all field tasks remotely.

However, Prof Duckett sees larger numbers of lightweight machines as the long-term future of agricultural robotics to reverse the recent trend of increasingly larger machinery that has resulted in more soil compaction and continued reliance on fossil fuel.

“[The alternative] is to build autonomous robots, so rather than upscaling with bigger and bigger machines, you could have a fleet of smaller robotic systems [that] run off electric and do the job much more efficiently,” he adds.

So, what technology is required before we see these robots zipping around in UK crops?

The fundamentals for a robot to behave autonomously are perception to make sense of the world around it, decision-making capabilities to plan a course of action, control processes to execute the planned actions, and the capacity to interact with humans.

Find out more about Arable Horizons, and sign up to attend future talks.

These characteristics allow a robot to sense, think and act to complete a set task, and much of the enabling software and hardware is already in existence or close to realisation.

Prof Duckett says that the agricultural engineering industry is already outstanding at building the hardware and actuation technology seen on implements working in the fields today.

However, the sensing and thinking components are where computer science steps in, with one example being the camera technology that allows a computer to see in 3D and perceive depth of field – like that used in Xbox or Nintendo Wii consoles for interactive gaming.

“In the past few years, we have seen huge advances in both these areas and now have excellent perception and vision systems and reasoning systems that can work very fast. The challenge now is to put them together and apply them to do useful things,” explains Prof Duckett.

In addition to perception and vision systems, robots in agriculture will also need the ability to learn so they can cope with the fast-changing nature of the agricultural environment.

Prof Duckett says this isn’t possible at present, with programmers unable to predict and prepare the robot for the huge range of variables it might encounter while out in the field. 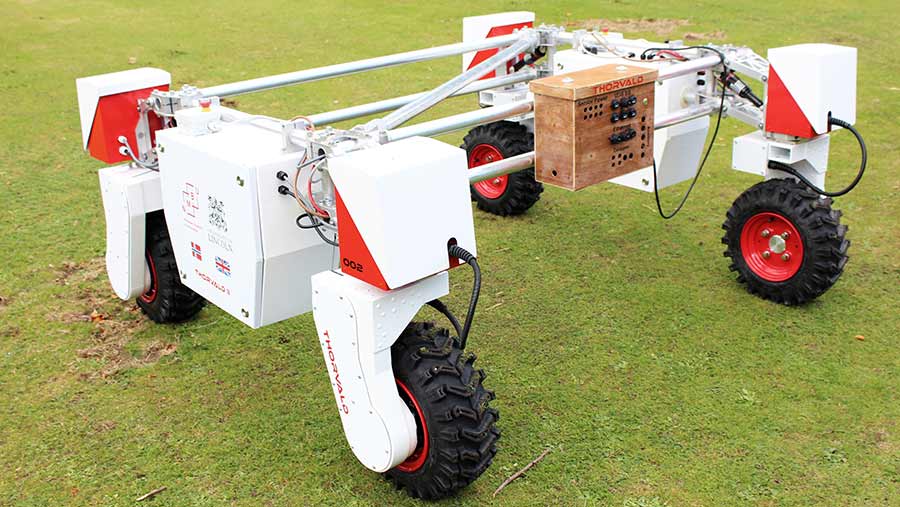 One of the Lincoln robots

As such, he sees the future of agricultural robotics being established on “human-in-the-loop” robotic systems, which will require a degree of human “training” to ensure it operates in the correct way.

This has its limitations, however, with the principle of “fan out” dictating how many robots can be controlled by a human at any one time.

This is influenced by the amount of time the robots can operate on a single charge and the interaction time required between human and robot to function appropriately. The former will need to be increased and the latter reduced for robots to be a success.

At present the military is using multiple robotic unmanned aerial vehicles (UAVs), but these currently require more humans than robots to function and would be impractical on farm.

“In the future, you will see robots with a much higher fan out, so one person can control many robots and we will need this to scale up these systems to work at a much higher volume,” says Prof Duckett.

While intelligent robots might be some way off, perception and vision technology is already being applied in the field via camera guided mechanical weeders.

An interesting example in the pipeline is a robotic broccoli harvester. Traditionally, broccoli harvesting is a very labour intensive process and requires a skilled human to select heads ready for market and cut them in the correct place as they move through the crop.

However, access to enough migrant labour is under threat as the UK prepares to withdraw from the EU, so an automated system that requires little or no input would be hugely beneficial.

Prof Duckett’s team have managed to devise a trainable vision system using cameras and a software algorithm that recognises the location of each market-ready head based on its size. After testing in the UK it has proven itself to be 94.7% accurate.

The next step and perhaps the hardest part is to devise a mechanical solution that can part leaves and cut the head in the correct place without damaging the product, potentially enabling several machines to be fitted to a rig and requiring just one operator or even driven autonomously.

While some may be sceptical about the pace at which advanced robotics and automated technology will be adopted in agriculture, Prof Pearson is confident that farmers will see a step change in the kit used on farm by 2030. 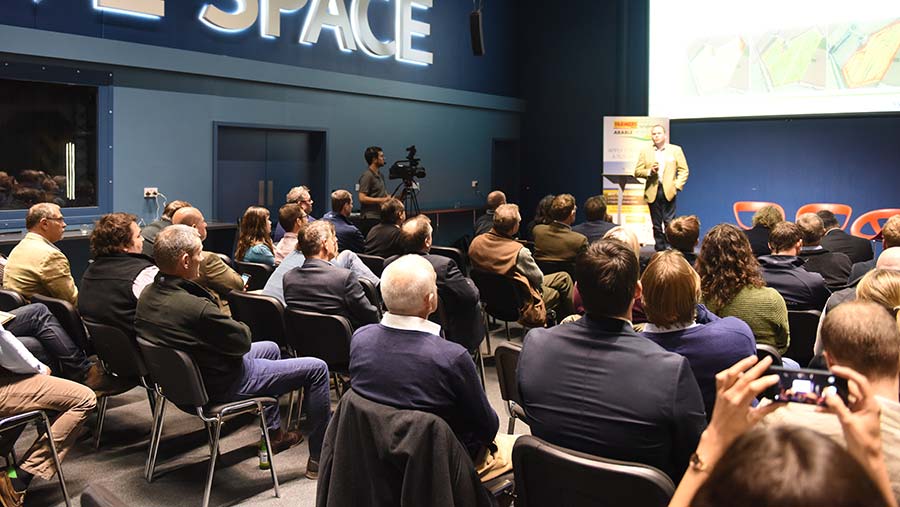 He backs up this theory with the example of the Darpa Grand Challenge in the US – a competition where fully autonomous vehicles compete in a 150-mile race across the desert.

In the first race back in 2004, none of the entrants completed the race across a near barren landscape, but fast-forward to 2017 and a car manufactured by US firm Tesla is able negotiate busy urban roads with no driver input whatsoever.

“So, I’ve got no doubt that if we wind the clock forward, we are going to see some tremendous developments [in agricultural robotics] in the next 13 years,” adds Prof Pearson.

Military technology – The military is already using multiple unmanned vehicles that are all interoperable via multiple sensors on the ground, on drones or satellites through a central data control system. It is predicted that this technology will be widely adopted on farm in a little more than a decade from now, allowing the whole production system to be controlled in sync from a central location.

Robot ready farms – Vastly improved battery technology will allow machinery to run on carbon dioxide neutral, emission-free renewable electricity generated on farm. Plant genetics will allow breeders to tailor crops to suit robotic harvesting, which will be particularly important in the fresh produce sector where manual labour is relied upon for harvesting.