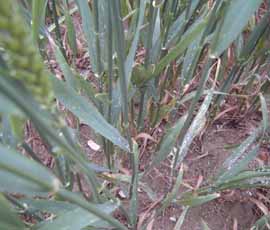 Don’t overreact to the high levels of foliar diseases, especially mildew, in cereal crops this autumn. In all bar exceptional circumstances treatment with fungicides shouldn’t be required.

Widespread disease has been reported in winter cereals as the mild autumn continues, with powdery mildew being the most active. There have been fewer reports of yellow and brown rusts, along with net blotch in winter barley. The worst cases of mildew have been reported on lighter land where crops are backward.

Andrew Cotton, of Cotton Consultancy in Bucks/Oxon/Northants/Berks, described the mildew levels as the highest he had ever experienced. “It is as bad as I have ever seen it.”

But despite the high levels, it was mostly in the older leaves; crops were well-tillered and could withstand the disease pressure until the spring, he said.

“It is easy to overreact,” said Sean Sparling of Sparling Agronomy Services in Lincolnshire. “Despite mildew being as bad as I have seen for many years, I have seen very little presence of brown and yellow rust.

“Crops are not getting worse and therefore I can see no economic justification for a fungicide before T0 in the spring.”

Mr Sparling had treated some barley on light sandy soils. “Only with barley on light land and the backward crops where plant losses can’t be afforded can a treatment be justified”.

“In our Solstice, infection was patchy but intense,” he said. “In our barley it was much more widespread.” A treatment of 0.25 litre/ha of Corbel (fenpropimorph) was applied to control the infection.

“The application will hold the disease, as we can’t rely on the cold weather to do so,” Mr Blenkiron explained. “We will be monitoring out later-sown Solstice for infection and may have to treat that also.”