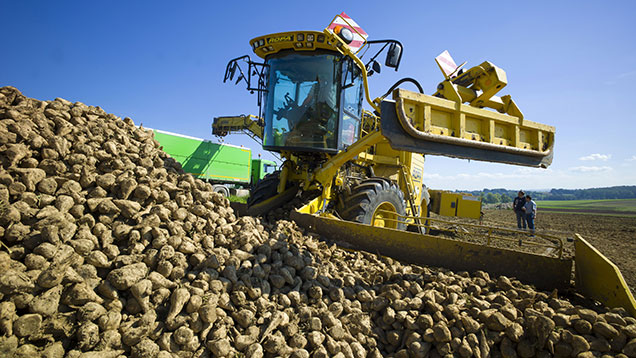 A new fungicide containing a combination of two azoles offers sugar beet growers another option against foliar disease this season.

Speaking at the British Beet Research Organisation (BBRO) open day earlier this week, he said that the difenoconazole + propiconazole-containing product will prove a direct replacement for Syngenta’s Spyrale, which is no longer available.

“Armure has the added advantage of the stronger curative and protectant triazole activity,” he advised.” It is recommended as the first spray when the crop reaches full ground cover, to prevent early disease development.

“For later crops, it can be followed by Priori Xtra (azoxystrobin + cyproconazole), to complete the green leaf enhancement through to lifting.”

Crops are set to reach full ground cover within a few weeks, however damp conditions persist and rust is likely to be the first disease to strike at about the same time, warned Mr Roberts.

“Armure has the added advantage of the stronger curative and protectant triazole activity.”
Simon Roberts, Syngenta

Mark Stevens of BBRO highlighted that while powdery mildew has historically been seen as the key foliar disease, Rust has become more prevalent over the past two to three seasons.

“That could primarily be down to conditions, but most of the leading sugar beet varieties, including those in the ground this season, have a lower resistance to rust.”

He pointed out that ramularia can also cause problems in cool, damp conditions, while growers should remain aware of the risk of cercospora, which is a major issue across large parts of Europe.

Dr Stevens advocated that all beet crops should receive at least one fungicide treatment, with any crops destined for a post-October lifting benefitting from a second spray.

Crops that are to be left until after Christmas – which have seen some of the highest yields in recent years – may see a further benefit from a three-spray programme, Dr Stevens said.

“Open autumns, with milder weather and sunnier condition, can continue to drive yield and sugar content of beet in an extended season, provided they have retained the green leaf area,” he added.

Mr Roberts advised that sugar beet growers can make up to two applications of Armure, at a rate of 0.6 litres/ha.