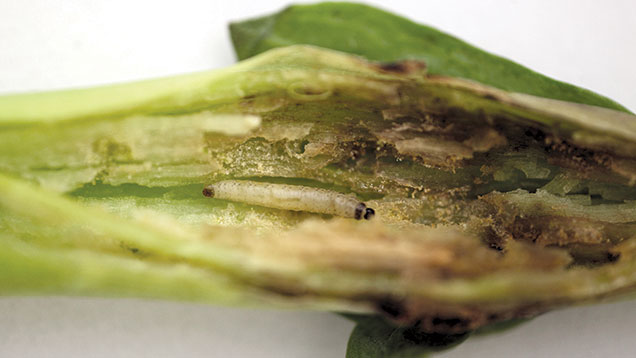 Although it is too early to say what effect this will have on yield – no larval thresholds exist for spring infestations – these crops are looking poor, says  independent agronomist Matthew Paterson

About half the crops in his area on the Essex/Hertfordshire/Cambridgeshire borders were hit by flea beetle in the autumn and pigeons over the past few months.

“This area is always a flea beetle hotspot but was especially so last summer, partly due to the suspension of neonicotinoid seed dressings and because crops were very slow to get away in the dry September,” says Mr Paterson.

Flea beetle larvae are now rampant in some crops and he has found up to 10 larvae a plant, some up to 5mm in length, and in some cases they are undermining the growing point on the main raceme.

“This area is always a flea beetle hotspot but was especially so last summer, partly due to the suspension of neonicotinoid seed dressings and because crops were very slow to get away in the dry September.”
Matthew Paterson, agronomist

The problem is more serious in crops that suffered heavy pigeon grazing and some stems have been weakened so much they are starting to lean – up to one in five plants in worst affected fields – and is being compounded by the cool weather, which has delayed growth.

He says there is no cure as there are no pesticides is available to control larvae within plants and it’s not clear how yield will be affected – from past experience if there are more than five larvae, plants may not recover.

If there are fewer than five or they remain in the leaf petioles, it’s worth persevering – last year one crop yielded 3t/ha on 3.5t land, despite its petioles being heavily infested, by producing branches to compensate, he says.

“Larvae numbers and associated leaf scarring have been assessed in high- and low-risk sites.

She adds it’s too early to say what effect late infestations will have on the crop, but by taking all sites to yield it is hoped to find out.

Feeding damage could continue until mature larvae move out of the plant in late April/early May to pupate in the soil, says Adas entomologist Steve Ellis.

“Generally speaking, oilseed rape is a pretty resilient crop, and earlier work has shown plants can withstand up to 13 larvae a plant without affecting yield,” he says.