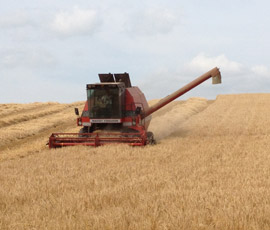 The first barley of 2013 is being harvested, with one grower in the South West making the most of the recent heatwave across Britain.

Gloucestershire farmer Geoff Morgan began harvest on his 100ha mixed farm near Tewkesbury on Sunday (14 July), with the current heatwave set to continue.

The winter barley crop of Suzuka was sown on 18 September and Mr Morgan says it has so far yielded about 7.4t/ha.

“It’s actually quite heavy clay land that is hard to work, but it went on in ideal conditions and seems to have performed fairly well,” he says.

“We are always reasonably early in this area, but I’ve not seen anyone harvesting just yet. We harvested 5ha over the weekend and then will finish the other 5ha this week,” he adds.

Mr Morgan says he’s delighted with how it has yielded, particularly after experiencing a tough time last year.

“I’m relieved to have any crop to harvest if I’m honest – last year we lost all our winter barley to barley yellow dwarf virus,” he says

Mr Morgan adds spraying for pests and diseases is not normally a major issue on his Freemans Court Farm, Twying, close to the River Severn.

“Our main pressure comes from grassweeds, but we got all our sprays on at the right time and the crops looked very clean all year,” he says.

NFU chief arable adviser Guy Gagen says most growers will still be ten days to two weeks away from harvest, but the hot weather may not be helping with the yield.

“Crops will have had a lot of moisture in the soil all year, so the roots won’t have developed deep enough to get the moisture when it is actually needed.”

The area of winter cereals is set to be lower this year due to poor autumn drilling weather and yields are likely to have suffered.

“There will be crops dying off and possibly missing out on the grain filling period, but the main thing will be the lack of drought resistance in them,” he says.

Following a tough year, growers will be keen to get the combine out as soon as possible, with many in the South normally well under way in early July.

“It’s obviously going to be slightly different this year. Normally areas such as Dorset will be where you hear the first reports, but there are always a few areas across the country that have their own micro-climate and get away quicker,” he says.

David Leaper, arable technical manager at Openfield, says the warm weather can only be good for bringing the harvest forward and expects the cutting of winter barley to start in the next few days.

“A lot of crops are moving rapidly and we are starting to see cereals on light land turn quite quickly,” Mr Leaper adds.

Growers optimistic as pea harvest gets under way.