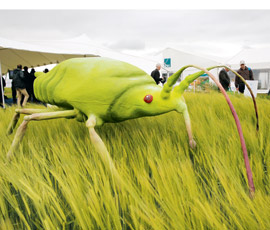 Rising levels of the pyrethroid-resistant grain aphids could see a steep increase in barley yellow dwarf virus (BYDV), with options for growers running out.

Until 2011, pyrethroid-based sprays offered good control of BYDV transmitting aphids (Sitobion avenae), but fears have grown since then with resistance being found in up to 50-60% of aphid populations.

Lin Field, lead researcher at Rothamsted, believes it is a worrying trend and one she expects will continue to grow in 2014.

“Pyrethroids have offered great control of aphids, at a low cost, so growers haven’t had to think about the issue too much,” Prof Field said.

“But it looks as though we’re going to have to look for some different alternatives,” she added.

However, there are very few currently available to growers with neonicotinoid-based sprays offering the most suitable alternative.

“They are slightly more expensive and with the growing debate over the effect on bees, whether we will still have them for cereals in a few years’ time remains to be seen,” she said.

“Alternatives to pyrethroids need to be evaluated in anticipation of increased resistance causing widespread spray failures and greater BYDV problems.”

Prof Field highlights one of the major worries growers are faced is from the formation of a more severe version of resistance known as super kdr (knockdown resistance).

Currently, Prof Linn believes there is a strong likelihood it will be found creating even greater levels of resistance.

“With the current kdr mutation you will get some effect on the aphid. However, if this [super kdr] occurs then in reality you would have to drown them to control them,” she added.

The current late season has seen the usual spray time for aphids pushed back with growers now looking to spray in the next two to three weeks.

Stephen Foster, research entomologist at Rothamsted, believes the fact the resistance was found on such a large scale last year would suggests it will also be prevalent this year.

Mr Foster notes that the late season may favour the aphids as they may avoid their natural predators such as ladybirds.

“There may be a small window of opportunity for them to thrive without their natural predators about. They can breed very quickly,” he added.

“It can be a huge problem once in the field and if aphids are poorly controlled this year then the damage to next year’s crop could be a worry,” he explained.