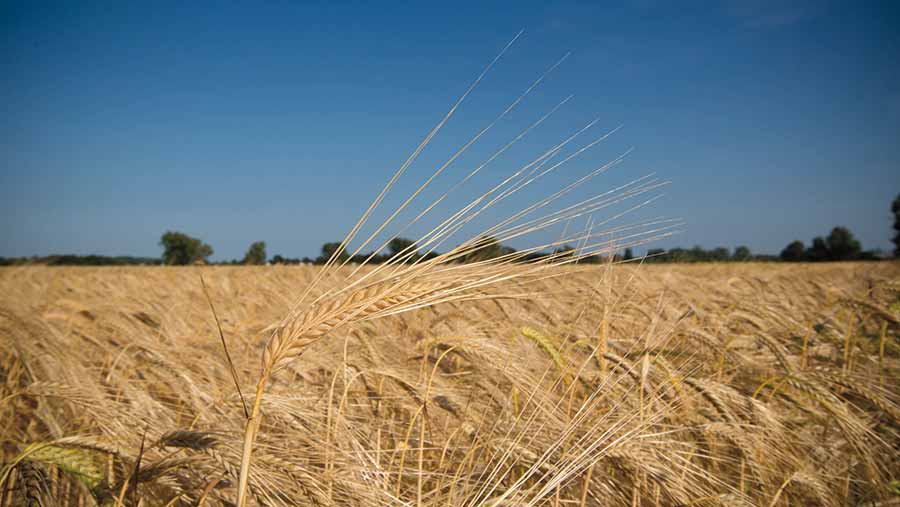 Feed barley plantings have seen a resurgence in recent years, but with the current high stock levels and depressed prices, what are the prospects for next season?

Barley has been trading consistently below £100/t ex-farm since July last year – apart from one price rally in October – and it fell as low as £90.30/t in September.

The low prices have been blamed on higher production, following a gradual shift towards growing more barley – especially spring barley – for agronomic reasons, according to Graham Redman, partner at the Andersons Centre.

“Also, in recent years the climate has meant poor planting conditions in the autumn and good spring drilling conditions, which has resulted in more barley being produced than is used, including for the export market,” he says.

Will Gemmill, partner at Strutt and Parker, says that blackgrass issues and developments in breeding for higher yields have also resulted in increased barley plantings.

Though full planting estimates are not yet available for 2016, Brenda Mullan, analyst at AHDB Cereals and Oilseeds, says that as of 1 December 2015, there was a 1% reduction in the UK winter barley area for harvest 2016 compared with the previous year.

This year, barley yields are predicted to fall by 3% to 4.87t/ha across the EU, but this would still be higher than the five-year average. As a result of the current large crop, the barley carryover this year is likely to be the biggest for over 20 years, adds Mr Redman.

“At some point, stocks will start to get lower, but it might take a season or two.”

While barley use in animal feed had been increasing, this might be temporary, as the gap between feed wheat and feed barley has begun to narrow again, down to £2.90/t on 6 April compared with £7.80/t in mid January, says Ms Mullan.

Between June and February, the UK used 2% more barley in animal feed production than the previous year.

“But anecdotally, if the gap between wheat and barley prices hits less than £5/t, processors will take barley out of the mix.”

However, UK exports have been trading well ahead of 2014-15, with current season figures up about 28%, says Ms Mullan.

“Stocks would start to fall if exports continue at this pace. Barley finds demand outside of EU countries better than wheat does, with about 20% of overall barley exports going to non-EU countries.”

Within the EU, exports were about 18% ahead of last year by January, which could be a result of France shipping a lot of barley to China, she adds.

The two main global export destinations for barley are China and Saudi Arabia, according to Cecilia Pryce, market analyst at Openfield.

She points to USDA showing the rise of Chinese imports which in the 2015-16 season accounted for 28% of all global barley exports.

“The majority of the 2.18m tonnes imported in 2012-13 was malting barley and China has since moved into taking feed barley.”

However, there are fears it could take less feed, particularly as China is currently changing its overall agricultural policy on imports and domestic cropping, adds Mrs Pryce.

Saudi Arabia imports an average of 8m tonnes of barley a year, which accounts for about 30% of global barley exports, she explains. But it is also trying to change the way it produces commercial feed and is changing domestic agricultural policies, which could reduce barley demand.

“If both China and Saudi Arabia change their current buying habits, potentially the barley global export market could see an unprecedented change.

“The EU exports to northern Africa, which is an important market for the UK, but it is relatively small compared with the Saudi Arabian and Chinese markets.”

Recent changes to the Argentinian government and policies also mean it has the potential to grow barley for export, warns Mrs Pryce.

“Historically it has produced good feed and malting barley, which if repeated in the future could readily become competition for other global barley producers.”

Mr Redman suggests that farmers who have stocks should sell some to help mitigate risk. Prices might not be favourable, but they could decrease further, he warns.

The latest USDA report on 31 March indicated that the amount of wheat in the ground in the US had fallen by 9% to 20m hectares, however plantings of maize (a direct competitor to barley) had increased by 6% to 38m ha.

That would be the highest planted acreage in the US since 2013, and the third largest area since 1944.

“This does not indicate that the price of barley will go up,” says Mr Redman.

Farmers might consider aiming for malting quality due to the rise in popularity of craft beers, says Mr Gemmill.

“There are a few niche contracts available for varieties such as Maris Otter.”  The UK also signed a deal with China in November 2015 to export an extra 750,000t of malting barley, which may offer further opportunities.

“If it is going into your own animals then you are fine, but if it is not and barley falls out of favour, there is only a finite amount of UK livestock to feed it to; and distillers also face a finite demand.”

Unfortunately farmers have few alternatives if they want to move away from barley. Many are already trying to manage early drilling of oilseed rape and blackgrass issues while complying with the three-crop rule and a wheat market that hardly encourages more acres, says Mrs Pryce.

“If a farmer is growing barley, they need to choose a high-yielding variety, with low inputs and the best gross margins. They need to go in with their eyes wide open to global supply-and-demand changes alongside having an active marketing policy.”