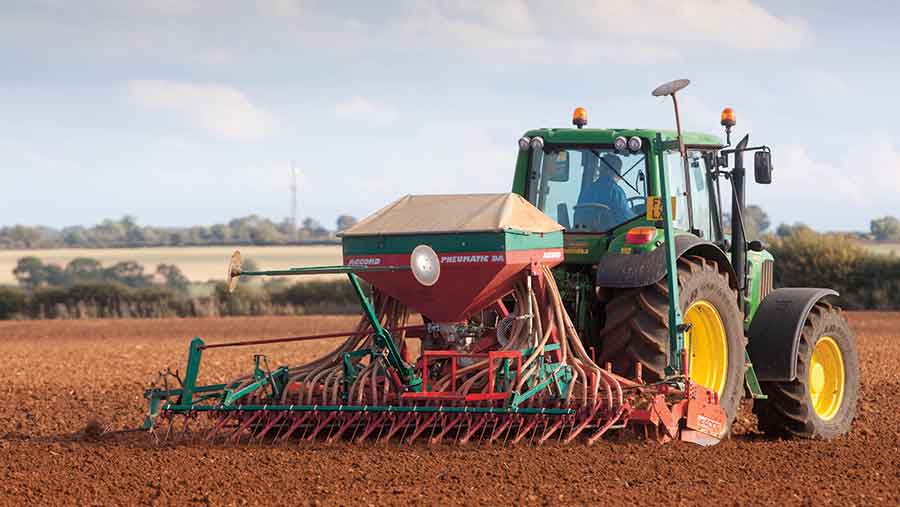 Hybrid barley could see an increase in its market share this autumn as two new varieties deliver a step change in yield, making the crop a more tempting option for growers.

Next-generation hybrids Bazooka and Belfry are in their first year of commercial use and have attracted both new and existing hybrid barley growers.

Both varieties, from Syngenta, offer a step up, with Bazooka topping the UK yield on the 2016-17 AHDB Recommended List at 107% and Belfry close behind at 106%.

Mark Bullen, seeds manager at Syngenta, points out that Recommended List trials are not representative of farm scale, where hybrids bring consistency to the field, especially on marginal ground or in challenging conditions.

“In a second wheat scenario, hybrid barley can also stack up, especially when the difference between the price of feed barley and wheat is minimal,” he adds.

Along with their better yields, the varieties also have a valuable suppressive effect on blackgrass in line with other Hyvido varieties such as Volume, which has been shown to reduce seed return in a treated situation by more than 90% compared with wheat.

“The blackgrass plants that do survive have lower tiller numbers, smaller seed head size with fewer seeds a head. The seeds are less viable too.”

Blackgrass suppression and early harvest are key drivers for growing a hybrid in the East, says Paul Taylor, regional seeds manager at Agrii.

“Barley was driven into the rotation by getting rape in earlier since the loss of neonicotinoids. But with an emphasis now on getting some heart back into soils through using cover crop,s the early entry is still important, especially if using short-term catch crops.”

Belfry, with its shorter straw (100cm), will appeal to growers who incorporate straw back into the soil, and for those on exposed sites. It will also be a step forward for current Galation growers, he says.

Bazooka will be a progession for Volume growers UK wide. With its 9 score for rhynchosporium it will find favour especially in the West, where its additional straw length (108cm) will add to the variety’s value.

Bazooka is already making an impression in the North, where hybrid performance has been consistent on the less fertile soils and in later-sown situations where the varieties cope with tougher winters, according to Scottish Agronomy’s Andrew Gilchrist.

“Bazooka is the best one yet. It’s out of the traps quicker in the spring, it grows away quicker, has better disease resistance – especially against rhynchosporium – and it has yield and specific weight.”

Bazooka’s resistance score of 9 for rhynchosporium brings peace of mind to growers in the North, he says, and a cash saving too.

Based on two years of trials, including this year’s challenging season, Mr Gilchrist has dropped the T0 on Bazooka and maintained a robust T1 and T2 fungicide programme.

“Compared with Glacier or Tower it [Bazooka] is immaculate this year. We have some serious rhynchosporium up here and some of the two-rows with a solid spray programme are looking average.”

The bad rhynchosporium year is likely to provide a wake-up call for growers, who will realise that two-row varieties can’t be grown on the cheap, and this may make them look towards the new six-row hybrids, he says.

Bazooka’s height shouldn’t worry anyone and growers should be confident that they are dealing with a tall, stiff variety that doesn’t need a blockbuster PGR programme to handle it.

“Don’t assume because it is tall, it is weak,” says Mr Gilchrist.

Agronomically and economically Bazooka and Belfry are very appealing, yet there are reasons why growers might be cautious about moving into hybrids, says Chris Guest, Gleadell’s seed manager.

The initial up-front investment in seed, the inability to save seed and the low sowing rate are a consideration, as is attaining the published yields.

“Rarely do we have someone who goes back to growing a conventional after trying out a hybrid,” he adds.

The perception that six-row hybrid barleys have high screenings, are tall and a bit of a lodging risk is a thing of the past, he says.

These high-yielding new varieties are still tall, but they have manageable, stiff straw and if they are drilled at the correct rate and managed correctly, they perform well.

To get the best out of the crop growers need to follow the growing advice, especially the sowing rate and early nitrogen, he says.

“If you want to push yield, you have to be prepared to manage it.”

Mr Taylor agrees and stresses the importance of farming by the canopy, not the crop.

“You might spend a bit more, but your cost per tonne produced will be lower.”

Agrii’s on-farm results from the South West comparing Volume with a two-row hybrid last season show that despite a £64.50 additional spend on the hybrid, the actual cost of production a tonne was just about £3 less.

And with the improvement in yields from Bazooka and Belfry, Mr Taylor expects the gap to widen in favour of the hybrids – and that doesn’t take the additional straw yield into account.

He also recommends growers sign up to the Syngenta cashback yield guarantee, the free insurance policy against the hybrid not reaching the expected yield relative to the independently audited reference sites.

Finally, Mr Taylor reminds growers to market their barley well, especially when they are locking into higher costs with hybrids.

“Big prices are paid for feed barley at certain times of the year. At harvest, it can be at a discount of £10/t or more to wheat depending on the season.

“So you need to have a consultative arrangement with your grain trader for barley and that may mean having a contract whereby you move it at harvest and price later”, he adds.

Grower Duncan Edwards and his son Charles admit they were initially put off growing hybrid barley by the price of the seed and the low drilling rate, but were persuaded to try Volume after a visit to Cereals in 2014.

“The results were absolutely tremendous. It yielded 4.03t/acre which is unheard of for us with barley – we generally get 2.75t/acre.”

“Equally, it yielded a tremendous amount of straw, which as a mixed farm is valuable to us. We generally get seven to eight round bales/acre, but we made 13.5 off the hybrid.”

The early maturity is appealing too. The Volume was combined on 12 July last year by a contractor and sold off the field, which was good for cashflow and for establishing oilseed rape, he says.

The consistent performance across the farm’s highly variable soil types that struggle to sustain second or third wheat was also a factor that led Mr Edwards to grow a hybrid again this year.

He is growing Bazooka adjacent to Glacier and although not yet harvested, the hybrid has looked good throughout the year, with impressive early vigour, low disease levels and good blackgrass suppression.

Mr Edwards’s management of Bazooka this year is similar to the Volume last year, following the breeder’s protocol of nitrogen timing, fungicide and growth regulator use.

“It’s certainly more expensive to grow, but even at £100/t it far outweighs the increased costs.”

The increased growing costs are mainly due to the £40/ha extra seed cost, as the added 15kg/ha of N is more than offset by the reduced herbicide input due to the vigorous growth.

Fungicide inputs were not scaled back in Bazooka’s first year on the farm, but in future Mr Edwards believes there may be scope to cut fungicide spend by omitting the T0, depending on the season.