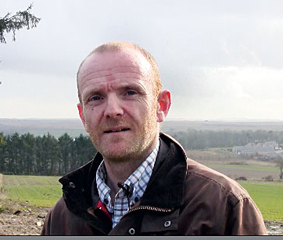 Rainfall is anything but a limiting factor for Knockothie Farms – almost double the monthly average fell on the Aberdeenshire holding in September last year.

Weather is, in fact, the single greatest headache for farmer Stuart Davidson to manage, limiting his cropping options and giving him an incredibly tight window for harvest and autumn cultivations.

Last autumn was particularly wet and Mr Davidson was forced to abandon planting before the end of September. “We just had to pull the plug – there was no way we could get back on it.”

As a result, about 200ha ploughed ground that was destined for winter barley has been left uncropped over the winter, he says. “I’ve got a lot of money’s worth of Volume barley seed sitting in the shed.”

Some of the farm’s soils are also difficult to work and his heavier clay ground has a maximum cultivation and drilling window of two days, even in a dry year, he notes. “If it’s too dry it ploughs up like bricks and you can’t break it down, even with the heaviest rolls. And if it’s wet it’s like slimy putty.”

Theses conditions mean wheat growing is too risky for him, so winter feed barley is the only cereal grown, says his agronomist Philip Smith. “You can get very good yields, but you have to accept that one in four is likely to be a complete write-off.”

Mr Davidson’s rotation consists of two winter barley crops followed by oilseed rape, but he plans to add some rotational grass for the farm’s suckler herd to widen the break.

Volume six-row hybrid barley was grown for the first time last season, but this year he has devoted half the barley area to it with the balance down to Sequel.

Volume performed well in its first year achieving more than 8t/ha, but the breeder’s recommended seed-rates are too low, says Mr Smith. “We add 25% onto the recommended rate, so we are drilling at 125kg/ha. But as soon as you start upping seed-rates, the economics don’t look so good.”

All oilseed rape has to be established before the end of August, but some of the most vigorous hybrids can occasionally be stretched into early September, says Mr Davidson.

Clubroot is prevalent in the area, but because much of the farm was down to dairy pasture, it has not been a significant problem, so far, he says. However, he is growing clubroot-resistant Cracker where the disease has started to appear. If pressure does increase, he says he will start to grow more Cracker, and eventually he will have to extend rotations.

Because break crops are severely limited in Aberdeenshire, there are no profitable options for increasing rotations, so he has to stick to a one-in-three oilseed rape rotation as long as he can.

This season’s oilseed rape area is split between 112ha Cracker, 63ha Emerson, 113ha Excalibur and 129ha Temple. All have good light leaf spot resistance, which is the main disease threat in the area. If weather prevents the November spray being applied, these varieties should cope, he says.

Almost all cultivation and drilling is carried out using a custom-built Watkins Quad till cultivator with a 6m Horsch Pronto TD drill mounted at the rear.

The 15t machine has nine spool valves, which adjust the degree of cultivation by raising or lowering the various legs and tines. The Quad Till has two sets of heavy discs, followed by a row of sub-soiler legs, a set of spring tines and a Simba DD ring, says Mr Davidson.

“We vary cultivations on a field-by-field basis, but aim to do as little soil movement as we can.”

However, soil movement often needs to be significant and, on the heaviest ground, fuel use from the Case Quadtrac 535 used to pull it is almost doubled. “When you drop the sub soiler legs in on that ground fuel use increases from 50 litres/hour to 100 litres/hour.”

This season he is building a strip-till cultivator drill, so he can experiment with a lower-till, one-pass approach and cut establishment costs.

A 6m Kverneland CTD cultivator is being used as the base and Mr Davidson is adding a second set of tines with seed boots, directly behind the main cultivator legs. These will be fed via a pneumatic drill hopper mounted on the back of the cultivator.

He also plans to add a liquid fertiliser applicator. “The good thing is that we can modify the cultivator without damaging it. It can easily be put back to its original form.”

Brome is the most challenging weed to control, as suitable treatments don’t feature in barley tank mixes, says agronomist Mr Smith. “Oilseed rape is currently the only opportunity to take brome out properly, but we’re looking at bringing in some spring cropping.”

IPU was the main treatment for brome in barley, but he now has to rely on pre-emergence products. “We use Picona (pendimethalin + picolinafen) and build [the programme] around it with Hurricane (diflufenican) and Liberator (diflufenican + flufenacet).”

The number of winter stem weevils has also increased over the past few seasons and these will need to be monitored carefully, he says. “We’ve had one or two plants eaten away at the growing point. It depends on the level of infestation, but yields could be significantly damaged.”

All spraying and liquid nitrogen application is carried out using a Bateman RB35 self-propelled machine, fitted with an AgLeader Opt RX variable rate sensor. This alters nitrogen rate, within pre-set parameters, according to crop colour and thickness, applying more on the poorer plants.

The sprayer, all tractors, and the combine are fitted with Trimble GPS on the RTK signal, and the entire farm has been mapped and zoned by Soyl, says Mr Davidson.

All of this season’s P&K has been applied at variable rates using a tractor-mounted Amazone Profi S spreader.

Mr Davidson is working to improve soil structure by incorporating food waste compost and improving drainage. He started spreading compost two years ago and has enough stockpiled this season to cover one-third of the farm. The hope is that by adding organic matter it will allow the severity of autumn cultivations to be reduced, saving time and money, he says.

Drainage is poor across the farm and all drains are old clay pipe or tile construction with no backfill, he says.

He is hoping to gradually drain the whole farm and is building his own drainage plough to cut costs. An old self-propelled Barth drainage plough, bought for scrap value, is being modified and will be pulled using the farm’s Case Quadtrac. Mr Davidson reckons he can cut drainage costs from £2500/ha he was quoted to £500/ha. “I couldn’t justify spending £1000/acre, so I thought I’d come up with my own tool.” Grade control will be managed using a Trimble GPS unit mounted on the plough, which will integrate with the tractor’s unit.

Harvest is often wet, so dryer capacity is crucial, says Mr Davidson. He is installing a pair of second-hand Alvan Blanch units to boost capacity and dry high-moisture grain as quickly as possible. One of the continuous-flow dryers has been placed outside the grain store and will be devoted to heating and drying. The second, mounted inside the building, will cool the grain before it is put into store. Mr Davidson hopes the system will have a 20t/hour throughput.

One Case 9010 Axial-flow combine with 9m header cuts the whole 1050ha, supported by a 16t Horsch chaser bin filling articulated lorries on the headland. Mr Davidson uses a local haulier to ferry all grain back to store as it cuts the number of staff and tractors required.

For more on our eight baromter farmers including pictures and videos visit www.fwi.co.uk/barometer

Watch an interview with Stuart Davidson at www.fwi.co.uk/scottishbarometer

Stuart Davidson farms 1050ha arable ground north of Ellon, Aberdeenshire, of which 890ha is owned and the rest contract-farmed.

Mr Davisdon farm in partnership with his brother-in-law Craig Hamilton who looks after the 180 cow suckler herd.

Winter feed barley and winter oilseed rape are the main crops and most grain goes to nearby ports of Aberdeen and Peterhead.