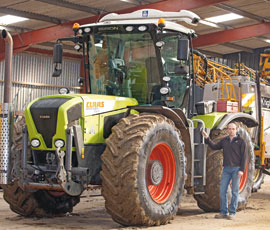 The dramatic change in the weather in recent weeks has thrown our Farmers Weekly barometer farmers plans into disarray. Adam Clarke finds out how they are getting on

The south-west region has not been suffering with drought like other parts of the UK, so it could be said that the excessive spring rains through April were not as welcome.

“We are currently trying to drill our grain maize, but we are really struggling. The ground had sludge spread on it and then ploughed earlier in the spring and it has rained since,” says Steve Lee.

Despite the spring sowing grinding to a halt Mr Lee is generally pleased with his crops, with winter wheat and the majority of his oilseed rape looking well.

Septoria is rampant through his wheat, with some yellow rust also thrown into the disease pressure mix. Mr Lee says the priority is finishing off the T1s, which have been disrupted by the rains.

“We will try to finish off the T1s, with around 80ha left to do, it has been a nightmare with the weather and easy to get caught out.

“Looking ahead, the more promising crops will receive a T2 based on the new SDHI chemistry, but where crops are showing less promise we will go for a triazole with chlorothalonil,” he explains.

In the south-east, Andrew Pendry has also had troubles with his maize planting. With around 140ha to drill, it was half completed in March, but halted due to dry seed-bed conditions.

“We almost considered abandoning the other half of the area with the price of seed where it is, however, the recent rain will enable us to produce good seed-beds once we get a dry spell.”

Mr Pendry is all up-to-date with his spraying, with T1s going on early. Last year he trialled some new chemistry at the GS31/32 timing, which showed some encouraging results on his GPS yield mapping data from the combine.

“We have used Nebula, and according to our results it showed up to 1t/ha yield benefit, although it was variable.

“We believe it’s the ‘greening effect’ of the strobulurin in the formulation that is giving that benefit, and we have the advantage of having our own data to help us make decisions on chemical choice,” he explains.

At T2, Mr Pendry is also going to opt for new chemistry this year with BASF’s Adexar being the mainstay of the application timing.

“We will also add some Anode with it, and I’m very confident that it will give us a return on the extra investment of around £10/ha.”

After missing the majority of the recent heavy rains, 51mm over one weekend has left James Taylor of The Co-operative Farms with 40% of his T1 sprays still left to do.

With the rain increasing the risk of septoria in wheat due to the rain splash, it has subsequently prompted Mr Taylor to change his tank mix to give some extra insurance.

“Our T1s are based on Nebula, and we will be increasing the dose of epoxiconazole to 75% to protect the crops through to the Adexar application at T2. The disease is really starting to show now, although the early yellow rust that crops were carrying has calmed down since Christmas,” Mr Taylor says.

Mr Taylor views oilseed rape as his main crop, and that is reflected in the investment in two fungicide sprays.

“All our rape has received a fungicide at 30-40% flowering of Amistar and Filan, and that will be followed by the same products two weeks prior to the end of flowering,” explains Mr Taylor.

“I’m really happy with the current price of oilseed rape and have sold some forward already,” he adds.

In Norfolk, Kit Papworth is waiting for a return to acceptable ground conditions to resume potato planting, having stopped just before the Easter weekend and has since been unable to travel.

“We are desperate to get planting again as we will soon be cutting silage and drilling maize for the anaerobic digester, so the workload is stacking up.

“With the inclement weather I also have concerns about our sugar beet herbicide programme, however, our long term ‘clean farm’ policy has paid dividends this year with very few weeds coming through in the beet.

“We will get a post-emergence on as soon as possible, and follow up again five to seven days later which should be sufficient. I’m mindful that additional sprays will start to diminish yields,” says Mr Papworth.

Wheat is looking well, with T1s all going on in good time. Despite the presence of a broad disease spectrum, he is now confident that crops are sufficiently protected until the T2 timing.

“I am more concerned about the lodging risk this year so all the wheat will receive an application of the plant growth regulator Terpal.

“Our T2 choice is yet to be decided and will be tailored to each individual situation across our farms, with crops walked weekly. We will certainly use SDHIs where the crop potential or disease pressure dictates.”

Graham McIntyre’s drought-prone soils have now received 150-180mm of rain through April, which was needed. However, it has left the farm with carrots and leeks still to plant so a dry spell is needed to finish off drilling.

“Sugar beet went in 10 days earlier this year but we have lost the advantage of the early drilling as it has turned cold since and the plants are just sitting there,” says Mr McIntyre.

Only 20% of Mr McIntyre’s T1s are complete, but equipped with a new Sands self-propelled sprayer he is confident that once conditions allow, they will cover the ground in quick time.

“We will drop the water rate from 200litres/ha to 100litres/ha and with some good organisation of chemical supplies and the water bowser we should catch up.

“T2 choice in wheat will most likely be Seguris, although we haven’t had any recommendations yet because the situation may change. It showed good results for us last year in the dry and all the SDHI’s are neck and neck on price,” he adds.

Early applications of nitrogen have paid off again for the farm and it is a policy that Mr McIntyre will continue with.

“It worked well in the dry last year and it has worked well this year in the wetter conditions this spring. Uptake has been really good and crops are looking well.”

The drought this spring has seen Colin McGregor irrigating spring barley that was moisture stressed on 1 April, which turned out to be more effective than the best rain dance. Since 4 April he has received 109mm, far exceeding the April average of 47mm.

“It was extremely dry and we had the equipment to irrigate just to help it along. All spring crops are now established very well.”

Spraying conditions have been tricky in the north, and Mr McGregor’s two 40m Rogator sprayers have had just 11 spray days during the month of April, and ground conditions have now become an issue.

“We will re-fit flotation wheels on one of the sprayers for spring bean treatments. The two sprayers between them will make short work of catching up on T1s this week, which have been a tank mix of Enterprise and Amistar-Opti.

“Looking ahead to T2 we will base them on SDHI chemistry, but choice will be dictated by the strength of each product,” explains Mr McGregor.

“Our flexible approach will mean that in rust situations or susceptible varieties we will use Seguris, Aviator Xpro will be used in milling varieties due to its activity on fusarium and finally Adexar where septoria is an issue.”

Over in Northern Ireland there has been a change in fortunes after some extremely wet seasons in recent years. Martin Hamilton’s spring programme has been able to progress well, with all carrots and parsnips now drilled.

“We are now finishing off planting the second half of our 160ha of spuds. We have emergence on much of the crop that is already in the ground,” says Mr Hamilton.

Spraying has started in earnest for Mr Hamilton’s farm manager Garry Adams, with herbicides going on to spring barley and potatoes.

“We have just made a start on the barley and a mix of Ally, Ally Max, Duplosan KV and Hallmark should give us good weed control.

“We are also making progress with our potato herbicides based on Defy, Retro and Linurex although it has been a little windy at times which has slowed us up this week,” says Mr Adams.

Nitrogen applications will be going on to the spring barley after herbicide applications at 125kg/ha of 27% nitrogen, he adds.