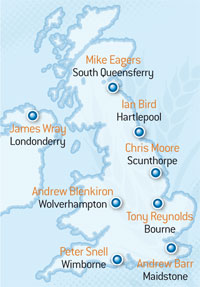 Given that stability seems a vanishing industry commodity, Andrew Blake asked Farmers Weekly’s Barometer farmers how they are approaching 2009 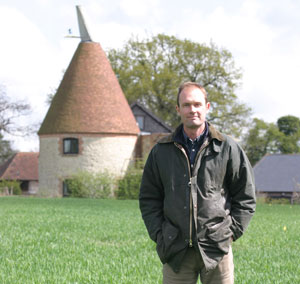 “The one thing we know for certain about what lies ahead is that we don’t know,” he says.

“Our main aim is to iron out the peaks and troughs, through marketing our grain through Weald Granary pools, and to continue diversifying.”

The farm, on a main road to the Channel ports, is ideally placed already renting out buildings for offices and storage as well as cottages. And there is plenty of scope to develop this.

“There are masses of opportunities. We’re looking to convert another building and I’ve even had people interested in growing grapes here. We’re looking to spread our risks and stay flexible to take advantage of any upturn.”

Fortunately, all this season’s cropping has gone to plan. “We’re clearly not as badly off as others elsewhere, though there’s been some soil damage.”

The EU’s pesticide proposals are also worrying. “There are lots of figures being banded around. But until we know exactly what will go it’s hard to tell how we might be affected.”

“We’re faced with cereal sales that will be much less than anticipated when we did our cash flows in March 2008. Even though we sold just under half forward, the average will still disappoint against budget.

“Whenever I think about commodity prices and markets my head hurts. As arable farmers we’re 99% price takers. But there are tools to increase returns and my New Year’s resolution is to improve my marketing skills. Addressing volatility is my single biggest challenge.” 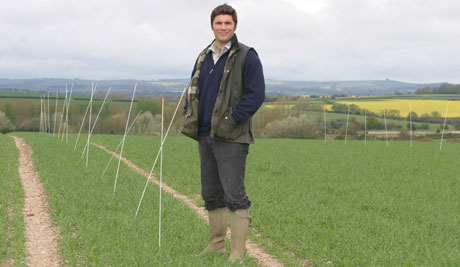 A big question mark hangs over the profitability of late-sown beans and winter rape, the latter under seemingly irresistible to pigeons, slugs and rabbits.

“I’m not sure we’ve yet struck the right balance between knowing when to leave a field uncropped rather than muddling it in late.”

Input availability will need more attention. “I’m relying more on our agronomist, Stuart Martin of Crop Management Partners, for advice on what to buy and when.

“Pesticide active ingredients are being withdrawn ten times faster than new ones are brought to market. Soon we’ll be left with just Bordeaux mixture and a stick.” 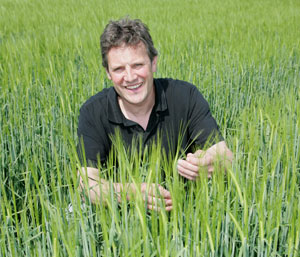 With the brief upturn in farming fortunes a fast-fading memory, Chris Moore is being forced to re-examine diversification and working with others to boost income.

“Last harvest really brought it home that we can’t make a living from just growing crops, especially only wheat and oilseed rape.”

The dilemma is that without Environment Agency assurance that the farm will not be abandoned to flooding, potentially more profitable options are non-starters.

Indeed, beetroot he used to grow for the Co-op will from now on be grown on its own land, despite continued investment in field drainage.

“Our biggest threat is flooding. We’ve still a lot more work to do, but if the water doesn’t get pumped away what’s the point?”

He hopes combined pressure from several drainage boards may persuade the EA of the need to help keep farms in the area productive.

“A lot of the boards, like ours on the Isle of Axholme, are getting together for a bit more clout. We want to keep farming, but until I know which way things will go I’ll try to grow more minimum risk crops and revisit some of my whackier ideas.”

A burial site has already been ruled out. But he hopes another venture dismissed three years ago may be revived shortly. “Watch this space.”

Keeping abreast of markets and prices, nationally and globally, should be particularly valuable, Simon Collins believes.

“We’ll be looking for those vital snippets of information to influence our buying and selling.”

Production costs will be more carefully scrutinised. “That’s so that when a spot price comes along that we’re happy with, we can accept it and make money.

“A wise mentor used to emphasise the need to concentrate on keeping fixed costs as low as possible. You have slightly more influence over these, allowing you a little more leeway in the variables.” 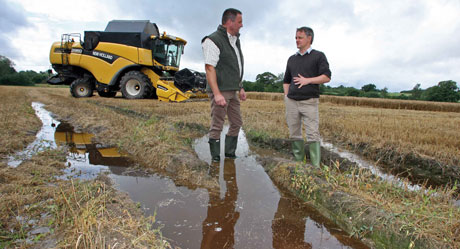 “He sold much of our feed wheat at good forward prices. We now need to monitor our stores well to make sure what went in comes out in good condition.

“We’re using frosty mornings to blow the heaps just to be sure.”

Inputs to crops that had a poor start will need closer monitoring. “There’ll be a fine line deciding whether to spend to try to push them or to accept potential yield reduction and adjust inputs accordingly.” 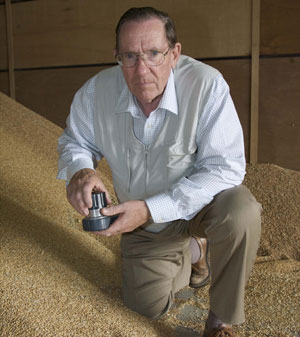 Late sowing and saturated soils have left the fate of 25% of Tony Reynolds’ autumn crops in the balance. And with commodity prices see-sawing widely, he finds himself hankering after the days of marketing boards.

“This price volatility is a curse. It makes it impossible to know what to grow, buy or how to invest. We need a steadying influence.

“We haven’t seen it this bad since between the wars, when the Milk Marketing Board was set up to bring in stability.

“Our plans have been de-planned by the very nature of the season. Growing grain for specific customers – for example, malting barley and milling wheat – will go by the board.

“We also succumbed and bought all our nitrogen for huge money under the threat – blackmail even – that the price would go even higher. Now with availability easier, it’s actually fallen.”

One glimmer of hope is that the Australian harvest is apparently not as good as expected, though the EU’s pesticide proposals could all too easily snuff it out.

“I’ve a huge fear of them. My concern is that we’re inflicting them on ourselves while other countries just carry on as before.”

For Ian Bird simply surviving in 2009 will be an achievement.

“It’s a long time until November. We’ve been on this farm 25 years, and I’ve never seen it in such a state, with water standing everywhere.

“Crops that have been drilled look desperate and will take a lot of looking after.

“It’s the first time that we’ll have 500 acres of spring drilling, and this Durham land doesn’t suit spring crops. If we can’t get a substantial increase in commodity prices for next harvest, they’re hardly worth putting in, unless we get a huge reduction in fertiliser prices.” 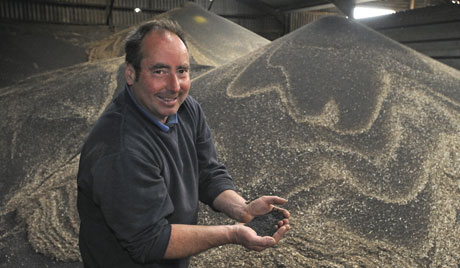 Storage at harvest, with everything likely to come off at the same time, is worrying.

His machinery policy is also under the spotlight. “We’re trying to be kinder to the land. We’ve ruined some fields with compaction which will take a couple of good years to put right.”

Money needs investing in drainage – the schemes in some fields are over 50 years old. “They can’t cope with huge amounts of rain we seem to get nowadays.” 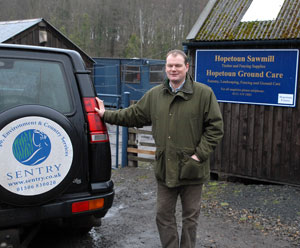 Mike Eagers’ primary aim for 2009 is recovery. After wet weather ruined harvest and thwarted autumn drilling he will have 400ha (1000 acres) of spring barley, well over twice his normal area.

“We didn’t get enough winter barley in. We need to get the rotation back and sort out our soil damage, so we’re prepared to throw a bit more money at our spring cropping this time.”

Any crops that might delay harvest are being shunned. But Sentry’s management agreement terms mean the land must be farmed, he stresses. “Some farms around here are fallowing – that’s not an option for us.”

Plans include buying another plough or importing one from the south, sourcing a third drill, and bringing in labour to ensure timely sowing in best possible conditions.

On the plus side he secured seed and malting contracts for whole area. “We have a few loyal maltsters and have it all tied up at £130-140/t.”

He also anticipates generating extra income from non-farming activities operating a digger and other machinery via Sentry Groundcare. “I’ve recently been asked to quote for some building foundations – horsey clients don’t seem much affected by the credit crunch.” 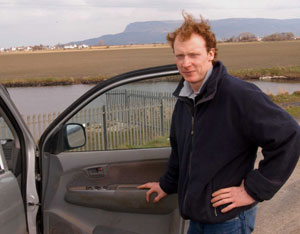 One of the wettest years ever for Northern Ireland is one James Wray clearly hopes to forget. “That won’t be easy, as the consequences will continue right through 2009.”

Nearly a third of his potatoes, 28ha (70 acres), are unlikely to be lifted until spring and he has no winter cereals sown.

“I’ll try to drill winter wheat in early spring, as the seed’s sitting in my shed and I don’t want our 500 acres of cereals to be entirely spring barley.

“Spring workloads will be a nightmare. Potato harvesting, grading and sorting, ploughing, drilling and spraying will all need doing simultaneously.

“So all I really want this spring is good weather.

“When conditions are as terrible as we’ve experienced, input costs and commodity prices don’t seem to matter much, though I know they do, perhaps even more so. But when we’re prevented from working, it becomes more a case of just getting the job done rather than making a profit.”

He had to invest heavily in a self-propelled potato harvester to try to get the crop out. “At least lower interest rates have helped, and on a lighter note Santa brought me a weather station.”