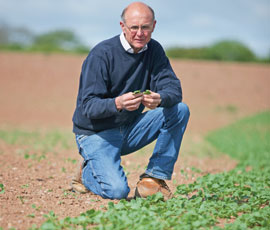 One of the most severe spring droughts in memory has already dented yield potential in a number of crops with the eastern counties suffering the greatest losses. James Andrews asked how our Barometer farmer’s crops were fairing

Cereals on his heavy land were starting to show signs of stress, but spring crops had already been damaged, particularly those on lighter soils, he said. “It’s hard to gauge how much, but we will now be losing yield.”

With no access to irrigation, he said there was little he could do to mitigate the problem, but because this was the third dry spring in succession he will consider changing his tactics next year. “Earlier beet drilling, deeper beet drilling are just two things we will be doing next year. Naturally it will probably then have a late frost that will then damage the crop that way.”

But making significant changes was a difficult call as it was difficult to predict if this was a long term climate change or a short blip. “The problem is I rely on spring crops to help in my battle against blackgrass, so it makes reducing spring cropping area very hard.”

Spring linseed had not yet germinated and he said he would be unlikely to grow it again next year.

Milling wheat growing on some of Andy Pendry’s lighter ground in Kent was under severe pressure, turning pale and yellow in places, with several tillers aborting. “It’s hard to say how much, but my current guess would be a 25-30% yield reduction.”

Mr Pendry had budgeted that his 40ha (100-acre) block of wheat on chalky ground would return 370t, but reckoned it would now yield 300t at best, even if it received significant rainfall. “I think it’s too far gone. At today’s prices it equates to a £15,000 loss.”

Most crops on his heavier ground on the Isle of Sheppey looked well. Milling wheats were starting to show signs of stress, but yield potential shouldn’t have been damaged yet, he said.

All maize had been drilled and 95% looked good as it had been put into seed-beds with some moisture, he said. “However, there is one block we are looking into the possibility of irrigating on Sheppey.”

Spring oilseed rape was Jonathan Fenwick’s greatest concern with just 3mm rain falling on Beelsby House Farm near Grimsby between February and May.

“We have a 300-acre block which is struggling to take off. It has already received two flea beetle sprays because it is so small and it’s just not getting going. This is my third year trying it and if it doesn’t work this time I won’t grow it again next year.”

Some spring barley was also poor with some fully developed at 15 to 18cm tall and spring beans were likely to be short with pods near to the ground.

Well-established winter wheat was looking well, but some crops which went in later had already lost yield potential. “It’s hard to tell, but we must be losing 0.5 to 1t/ha on some.”

Parts of the farm had access to irrigation on parcels of land, but he was not tempted to use it on combinable crops. “We can’t cover all the land, you’ve got the time and expense of putting out the equipment and then there’s the diesel cost as well.”

The trend towards drier springs was a concern, but he was not prepared to start changing his strategy for next season. “I have over 400ha of spring crops and it really suits my system.”

In Northumberland a week of rain at the end of March had helped keep crops going, but no appreciable rain had fallen since, said David Hall. “There has been a bit of crop damage, but if we get some rain soon it should be OK.”

Early-drilled wheat crops which went into good seed-beds were looking well, but winter barley was his biggest concern.

“Crops drilled after 22 September are starting to struggle as they didn’t get going enough before the winter. Lack of moisture and poor rooting are the main problems.”

The crop was starting to come into ear, so it was probably too late to rectify any yield damage, he said. Frosts were also adding to stress levels with temperatures dropping as low as -4C in the early morning, he added.

Spring barley looked more promising as drilling coincided with the late March downpour, said Mr Hall. “We were cursing the rain as only managed to drill 36 acres that week, but it turns out it was a blessing.”

Liquid nitrogen was used on all crops, which meant nutrient uptake had been good, despite the lack of moisture, he said. “In a year like this liquid nitrogen is a real benefit. We put some compound product on some of the spring barley and it’s still sitting there.”

Nutrient stress was the biggest concern in Devon, with many winter wheat crops looking pale and yellow, said Steve Lee. “They’re not suffering from lack of moisture and there are no aborted tillers. They just haven’t got access to any of the nitrogen.”

All the ammonium nitrate had been applied, but there had been insufficient moisture to wash it into the soil. “If crops don’t get rain in the next week there could be significant yield losses,” he said.

Because the crop was developing faster than normal he planned to apply the flag leaf spray at the end of the second week in May. “It’s going on significantly earlier than last year.

Staffordshire grower Peter Sands said winter crops on heavier were still holding out, but those on lighter ground were starting to struggle and he was irrigating a 50-acre block of spring oilseed rape.

“We started in the last week April and it helped it germinate – it’s now at the cotyledon stage. Some people on lighter ground have been irrigating for three to four weeks.”

Winter wheat on lighter ground would also be irrigated towards the end May if no appreciable rain fell, he added. “Flag leaf onwards is the key time to make sure the crop has moisture so we will put it on it stays dry.”