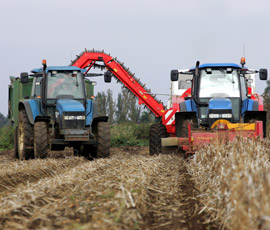 The German chemical giant BASF is moving its genetically modified plant development operations from Europe to the US, where there is less resistance to the technology.

The company announced on Monday (16 January) that it would move its plant science headquarters from Limburgerhof, Germany to Raleigh, North Carolina. Two smaller sites in Germany and Sweden will close.

BASF will transfer some GM crop development to the US but stop work on crops targeted at the European market – four varieties of potato and one of wheat.

The decision, which involves the net loss of 140 highly skilled jobs in Europe, also signals the end of GM crop development for European farmers.

Bayer CropScience, BASF’s German competitor, is working on GM cotton and rice in Ghent, Belgium – but not for European markets.

“There is still a lack of acceptance for this technology in many parts of Europe – [by] the majority of consumers, farmers and politicians,” said Stefan Marcinowski, a member of BASF’s board of directors.

“Therefore, it does not make business sense to continue investing in products exclusively for cultivation in this market.”

The company instead plans to focus on plant biotechnology markets in the Americas and Asia.

In 2010 BASF secured European Commission approval to grow a genetically modified potato in the European Union, the first such approval in more than a decade.

The Amflora potato was intended to provide high-quality starch for industrial customers. However, German test sites had to be put under constant guard and activists still succeeded in destroying potato fields.

BASF’s decision is a blow for the European Commission, which began a new push last year to allow farmers in Europe to grow gene-altered products in parts of the Union that accept the technology.

“There can be no doubt that the stifling and at times dysfunctional regulatory and political environment for agricultural biotechnology in Europe has played a major role in this loss of jobs and competences,” said Nathalie Moll, secretary-general of EuropaBio, the biotech trade association in Brussels.

“Decisions to stop innovating for and in Europe are a loss not only for one company, but for Europe as a whole and stand in stark contrast with the rapid adoption of this technology elsewhere in the world,” she added.

However, environmental campaigners welcomed the decision.

“This is another nail in the coffin for genetically modified foods in Europe,” said Adrian Bebb of Friends of the Earth.