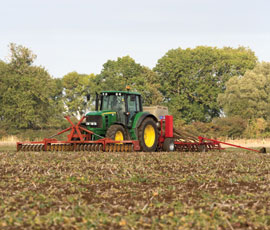 Agrochemicals giant Bayer has warned of a possible shortage of its cereal seed treatment Redigo Deter due to rising demand and a fire at a German factory last year.

The group’s production has not kept pace with rising sales, which has led to the insecticide part of the treatment, the neonicotinoid clothianidin, being in short supply.

Bayer said the shortage will not hit supplies of the neonicotinoid for oilseed rape seed treatment Modesto, which has been linked to a decline in bee numbers.

Usage of the cereal product in the UK has risen by 60-70% over the past two seasons because of the high levels of aphids carrying barley yellow dwarf virus in autumn 2011 and large slug infestations in autumn 2012.

The seed treatment contains clothianidin to control aphids, slugs and wireworms, and the triazole fungicide prothioconazole to control seed-borne diseases.

“We have secured more product for the UK than was used in 2011. But unfortunately we will not be able to fully meet demand if it reaches the very high level of autumn 2012,” says Peter Stacey, marketing manager for the product.

The German group said it has ramped up production globally but it has not been able to keep pace with rapidly increasing demand.

Production was disrupted by a fire last October at the group’s factory at Dormagen, near Dusseldorf, which supplies the group’s global supplies of clothianidin.

Mr Stacey said oilseed rape crops use less seed and cover a smaller area than cereals, so a much smaller amount of the neonicotinoid is used in oilseed rape than in cereal crops.

There is a vital European Union vote on Monday (April 29), which could decide the fate of neonicotinoids, brought to the fore because of their link to bee damage.