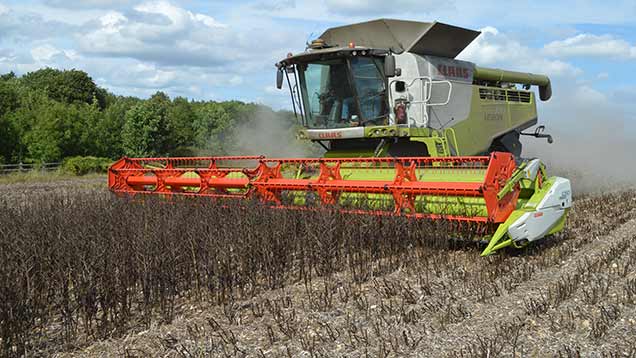 The bean area is set to rise this season as part of this nitrogen-fixing pulse crop’s renaissance following a good harvest and a sustainable market.

As the last of the bean crops are cut after a late harvest, yields have been respectable and quality good, with the damaging bruchid beetle not causing significant damage.

Andy Bury, pulse manager at distributor and grain trader Frontier, believes the harvested 2015 bean area is likely to be up in the region of 30% to about 130,000ha compared with 2014.

The catalyst behind the increase is due to new CAP “greening” rules, more spring crops for blackgrass control and lower oilseed rape prices, and Mr Bury expects the rising trend to continue.

“Gone are the days when you put beans in the ground and shut the gate – they need to be grown properly.”
Andy Bury, Frontier

He also reports a poor French crop, with lower yields and sub-standard quality creating a marketing opportunity for the 2015 UK crop. There will also be more opportunities in 2016, as the new crop area in France expected to drop.

The Baltic states are estimated to have increased production by about 25% to increase competition, but Mr Bury doesn’t feel this will be too bearish on the human-consumption market.

“Middle Eastern buyers don’t know the [Baltic] market, whereas the UK has their confidence,” he explained at a recent briefing.

While the human-consumption market and associated premiums might be attractive to some, demand for feed beans is on the rise in the UK and a £15/t premium over feed wheat is currently on offer.

“In the North and West, compounders are putting domestic beans into their ruminant rations in place of soya beans, so there is an underlying and sustainable market, and we are back to where we were in 2009-10,” said Mr Bury.

He added that the only threat to the healthy outlook is the Australian crop, which is 20% up this year and often of high quality and attractive to the human-consumption markets of the Middle East.

“It’s a threat to premiums and we need to get in there before the Aussies,” said Mr Bury.

On growing the crop, Mr Bury urged those putting the crop in the ground either this winter or in the spring to ensure they give it the attention it deserves.

“Gone are the days when you put beans in the ground and shut the gate – they need to be grown properly. The good growers are yielding up to 6.5t/ha and at that level, beans knock all other break crops out the picture,” he said.

While beans remain a strong cropping option, Mr Bury said the outlook is not so good for combinable peas, with a 15% bigger crop in 2015 and a carryover of old stocks putting pressure on prices.

“Prices were up at £150-£160/t this time last year, but we are now looking at much lower levels. Our advice is to grow beans and don’t grow peas without a contract,” he added.