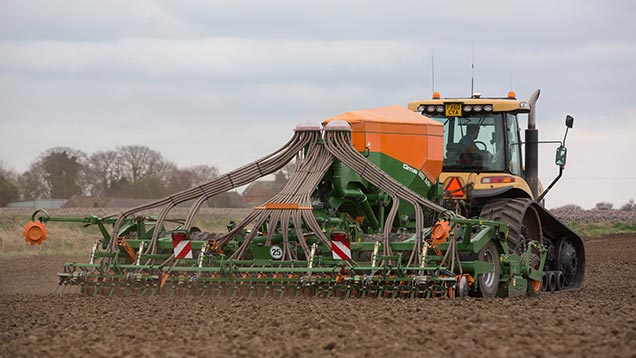 Spring bean growers should see good supplies of seed and a ready market for their crop despite an expected sharp rise in plantings.

The area down to winter and spring beans this season is set to rise by up to 30%, pushing prices slightly lower, but beans should still trade at a good premium over feed wheat.

He does not see seed supply being a major problem, as half that used comes from home-saved seed, and he urges growers to aim for the premium human consumption market.

“Put them in the ground, have a contract, and grow for quality,” said Mr Bury, who is also president of the British Edible Pulses Association (Bepa), at a recent briefing.

Some 250,000t could be heading for the fast-growing markets of north Africa, with 90% of this destined for Egypt, which has an annual demand for about 650,000t of beans for use in making falafel.

UK growers would be in a good position to supply this need instead of Egypt’s other big suppliers, France and Australia, as UK spring beans are seen as a premium product.

Mr Bury puts the expected rise in the UK bean area down to three factors – growers’ needs to meet new EU greening rules, the fight against blackgrass and a reaction to poor oilseed rape prices.

On the use of beans for feed, Mr Bury sees a return in demand from UK feed compound mills, a likely rise in needs from southern Spain and Italy and good demand for its use in fish food.

Although average UK bean yields are only about 4t/ha, Mr Bury says Frontier have supplier growers who are consistently harvesting crops of 5-6.5t/ha.

The combine pea area is likely to see only a small rise from the 30,000ha that produced a crop of 100,000t in 2014 due to limited seed availability and a poor market for feed peas, Mr Bury said.