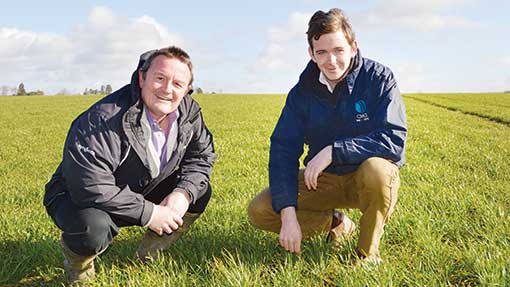 The mild winter and resulting forward crops is prompting Hugh Forsyth to beef up his planned early disease control across his winter wheat.

He believes that lush wheat crops will need extra protection this season against yield-sapping septoria on his south Warwickshire arable farm.

With septoria present on the older leaves of his wheat and reports of yellow and brown rust around the country, he has decided to front load his fungicide programme for this spring.

He is aiming to raise the dose of his first fungicide spray this month to keep a lid on cereal diseases, with little frost now likely to help control.

“Crops came out the winter looking lush and in a condition just right for septoria and rusts so we want to start off on a good stepping stone this season,” he says.

With about 500ha of winter wheat on his heavy clays soils he is looking to increase the dose rate of his first T0 triazole-chlorothalonil treatment this month.

Mr Forsyth believes early T0 sprays pay off about one year in three, and this season seems likely it will be one of those years as he aims towards wheat yields of 10t/ha. “We need to think about front-loading our fungicide regime to get off to a good start as there is a need to protect against septoria,” he adds.

He is growing feed wheat varieties Santiago, Diego and Relay and describes the first two as rust susceptible and they could quickly see rust develop with warmer and drier weather.

His average yields of wheat are more than 9t/ha but with crops looking in very good condition in early spring he is hopeful of some bigger yields.

The triazole-chlorothalonil approach will see the first component give good control of rusts and some septoria curative action, while the second will protect against septoria.

Septoria is the number one wheat disease threat on his farm and also nationally, and rainfall in April and May is critical to the development and spread of this wet-weather disease .

His choice for a mid-March T0 fungicide is the triazole-chlorothalonil product Cherokee, but rather than the usual 0.5-0.75l/ha dose rates he will raise it to 1l/ha, costing about £10-11/ha.

Mel Codd, business manager for Syngenta, which markets Cherokee, says the 1 litre approach should give disease control for 3-4 weeks compared with 2-3 weeks with the lower dose.

Mr Codd adds that because of the lack of frost this winter then rust diseases have developed in the south Warwickshire area, especially on fairly susceptible varieties such as Santiago.

“I have never seen rust in crops as early as in this season, with the disease present in some local crops in November,” says Mr Codd.

The risk of rust has prompted the move to grow the variety Relay which has much better varietal resistance to rusts compared with Santiago and Diego.

Mr Forsyth is farming 1,000ha of arable land at Tubbs End Farm, Butlers Marston, about 10 miles south of Warwick, and only a couple of miles from the site of the first major battle of the English Civil War at Edgehill in 1642.

His autumn-sown three-year rotation on his heavy soils is two winter wheats followed by oilseed rape although some of his second wheats have become winter barley.

Mr Forsyth’s T1 April fungicide is usually an SDHI-triazole-chlorothalonil approach with Seguris+chlorothalonil used last year although Tracker+chlorothalonil will be used where eyespot is perceived to be a serious threat.

Most of his wheat was drilled in good conditions in late September, germinated and emerged within five days, although a wet October meant 64ha were delayed until December.

In an additional move, Mr Forsyth will increase his loading of plant growth regulator (PGR) at the T0 fungicide, adding in Moddus to his normal chlormequat treatment as his heavily tillering crops this spring are likely to produce thick crops.

With no frost to kill off the extra tillers, the use of the PGR will control tillering and also strengthen the straw.