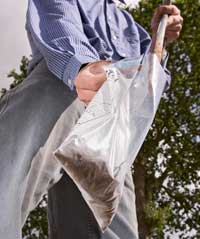 Detection of beet cyst nematode outside traditional hot spots this year is likely to lead to a more detailed survey for the sugar-beet pest next season, Broom’s Barn‘s Mark Stevens says.

“We’ve had a number of samples sent to our rhizomania detection service from the Peterborough/Lincolnshire border where the symptoms have proved to have been caused by beet cyst nematode. That’s outside the traditional fen area for the pest,” he explains.

It suggests the soil pest may be more of a problem than previously thought and requires monitoring closely, particularly as beet becomes more concentrated around fewer factories and with some growers moving to tighter rotations.

“It is why we’re hoping to do a more detailed survey in 2010, in conjunction with British Sugar and NIAB. The idea is to look at 500 sites across the beet-growing area to map its distribution, and also to look at the new genetics coming through.”

The new genetics include KWS variety Fiorenza, available this season, but also some other beet cyst nematode tolerant varieties waiting in the wings, he says.

“If you suspect you have beet cyst nematode you should call in your British Sugar fieldsman, or you can send some roots to Broom’s Barn to check.”

Symptoms, sometimes known as “beet-sickness”, typically include wilting and the proliferation of lateral roots causing a bearding effect similar to that caused by rhizomania.

But Broom’s Barn’s diagnostics for rhizomania and inspection for nematode cysts can quickly distinguish between the two conditions, he says. “It is less easy at the this time of year to spot the cysts as they go brown, rather than the white colour earlier in the season, but under a microscope they are very obvious.”

British Sugar also offers for £60-a-sample soil testing service, which will give some indication of the level of beet cyst nematode infection. “If you know you have a problem in a field it may be worth determining the level of infection,” Dr Stevens suggests.

That will help with decision-making over tolerant varieties, he explains. “There is a yield penalty in the absence of beet cyst nematode to using these varieties. For example, Fiorenza offers only 92% of the controls without BCN, but can give 30% higher yields that other varieties if there is a high level of infection.”

Sampling is being undertaken in crops destined to be planted with beet next spring, British Sugar’s Nick Morris says. “That gives the most accurate result for the BCN population that will be affecting the beet crop.”

The results, in conjunction with a risk assessment (see table), are used to help provide advice to growers about potential BCN problems. “Our current advice, developed with Broom’s Barn, is for a threshold level of 10 eggs/g of dry soil for BCN.”

But rotation length, soil type, number of brassica crops in the rotation and level of BCN host weed species in the field will also be used determine the final risk.

Number of BCN eggs and larvae per gram of dry soil

Number of BCN eggs and larvae per gram of dry soil