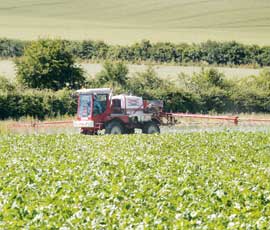 Sugar beet growers are being urged to carefully consider their disease control strategies given the season’s difficult conditions.

While early in comparison to normal years, the extreme wet is predicted to increase the pressure from both rust and powdery mildew. Because of this some agronomists are suggesting bringing forward fungicide programmes.

“The weather is likely to significantly increase fungal attack and we need to be on our guard,” explains Strutt and Parker agronomist Jock Willmott.

“While crops are looking weak and deficient in manganese and magnesium, we’re looking at topping them up with a tonic.

“At the same time it’s probably worth considering going in with the first fungicide, even though it is two weeks earlier than normal.

Bringing forward timings could create issues with product longevity and long-term efficacy. Consequently it is important that spray intervals are not stretched.

“With disease pressure as high as it is this season, sprayer passes cannot be delayed so it might be that this year is the year for a three-spray programme.

“Where we’ve got beet crops with good potential we’re prepared to push them and spend money on them to safeguard yield.”

He points out that although the cost of an extra fungicide treatment might reach £30/ha (including the sprayer pass), the yield response doesn’t need to be that great to justify that additional expense.

While early fungicides in beet have previously been thought to have the potential to knock immature crops, research conducted at Broom’s Barn last year might suggest otherwise.

Looking into the effects of three-spray programmes both early and late in the season, Mark Stevens’ trials have shown significant potential for improved yields.

“In our ‘early’ treatments we went in with the sprayer first on 21 June and then again at the end of July and the tail-end of August,” he explains.

“The ‘late’ trial had its first fungicide applied in late July, followed by two further applications at the end of August and September.”

Overall the results showed that crops sprayed three times produced between 3t/ha and 6t/ha more than those treated twice.

The effect of the timing of the programme start date (June or July) varied according to harvest date. Generally the early treatments boosted yields greatest for a November lift, while kicking off the spray programme later saw tonnages slightly lifted for crops harvested in January.

“We saw definite advantages in going to a three-spray strategy but the timing depends very much on harvest dates,” says Dr Stevens.

“Obviously extra fungicide treatments will help to remove the limiting factors of any disease in the crop and help to boost yield.

“But the results are greater than that. As in cereals, there will be a greening effect, helping to maximise photosynthetic efficiency.

“In addition, you’re getting additional frost protection, helped by the micro-climate created within the bulkier canopy.”

However, he sounds a note of caution when mulling over alternative disease control strategies.

“Previous research has shown 5% yield penalties when going in early so it may have been the case that our trials last year were just a one-off.

“We’re replicating them again in this year’s very different conditions so it won’t be until harvest that we’ll know the effects of implementing early and late three-spray programmes on weaker more immature crops.”