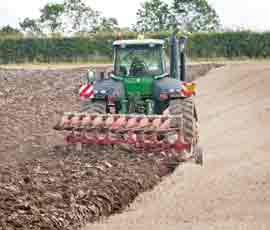 Round one of our virtual sugar beet growing competition proved challenging this year with only a handful of teams scoring maximum points, with subsoiling, primary cultivations and aphid carry over risks catching out many competitors.

But entrants who did not score heavily should not despair, as the competition allows you the opportunity to earn back yield through answers to open questions in rounds two and three.

While key messages on nematodes and rhizomania had been taken on board, there was still some confusion on certain aspects of soil cultivation and seed-bed preparation, said Mark Stevens, virologist at Broom’s Barn and Beet the Best judge.

Growers were asked about the optimum conditions for carrying out subsoil cultivations before a sugar beet crop. Some people selected conditions that were too wet for subsoiling, in particular, when the soil moisture content was between the upper and lower plastic limit, he said.

“Subsoiling when it’s too wet can result in soil smearing,” explained Steve Wilcockson, of Newcastle University, and fellow judge.

“The water doesn’t drain through and you don’t get the heave to shatter the profile around the subsoiler legs.”


Nearly all entrants identified that on heavy soils the optimum time for ploughing before sugar beet is mid-October to mid-November.

By ploughing heavy land at this stage, the soil was at its driest and capable of carrying machinery with less risk of compaction, said Dr Wilcockson.

“It also gives you the longest possible opportunity to benefit from winter weathering and the frost mould breaking the soil down.”

Those growers who ploughed early on the heavier soil types this season were reaping the benefits this harvest, noted Dr Stevens.

“They ploughed before the frosts came in, which produced a perfect frost mould that worked into a very fine tilth, and great seed-beds to sow in early to mid March and they are now seeing the rewards.”

Identifying the most effective way to reduce the risk of aphid carryover to sugar beet crops caught out several people.

The virus was picked by female aphids on infected beet on un-destroyed clamps, he explained.

Many entrants were also unable to identify leatherjackets as the seedling pests most likely to appear in a beet crop following a grass ley.

However, most correctly identified that Tachigaren (hymexazol) and thiram is the correct seed treatment combination used to control blackleg (Aphanomyces) and early seedling diseases (damping off).

Also, the optimum drilling depth for rapid germination and establishment of beet is between 25mm and 30mm.

“If sugar beet is drilled too shallow, there’s a greater risk of damage from pests, especially mice, and insufficient moisture for germination if seed-beds are drying rapidly,” noted Paul Bee, of British Sugar.

The optimum nitrogen dose and application timing on a medium soil with no organic manures following a legume is 30kg N/ha applied immediately after drilling, followed by 70kg N/ha at full emergence.

“Some people were caught out here by the need for less nitrogen when following a legume,” added Mr Bee.

But, most correctly picked AYPR as the strain of rhizomania, identified in Suffolk since 2007, as being able to overcome the Rz1 resistance trait (Holly gene) in commercially available varieties.

* BASIS registered entrants will receive 2 CPD points for each of the three rounds they complete.

For more information go to www.fwi.co.uk/beetthebest