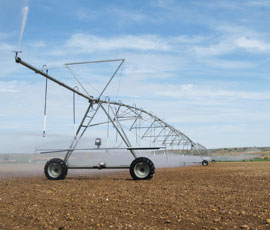 State-of-the-art irrigation systems providing unlimited quantities of water at the touch of a button are helping some Spanish sugar beet growers regularly achieve yields of over 120t/ha.

The new systems being installed across northern Spain deliver irrigation water to standpipes in the field to which farmers directly attach their irrigation equipment. The water is pressurised – meaning no additional pumping equipment is required – and is available on demand. This means crops are never subjected to drought stress, despite the naturally arid climate.

Annual rainfall in northern Spain ranges from 250mm to 400mm, but less than 50mm falls in the summer months, so irrigation is used to top total precipitation up to 600-700mm.

In some cases, the irrigation bill can account for almost half the growing cost, but without additional water it would be impossible to grow the crop, says Juan Antonio Sanchez, northern area manager for British Sugar’s Spanish equivalent, Azucarera Ebro.

The development was paid for by local government, but growers are gradually repaying the investment with a proportion of their water fee. Typically, rates range from €250-€400/ha (£220-£350) depending on the quantity of water consumed, says Mr Sanchez.

The whole process is fully automated and growers can request water via a website up to 24 hours before it is needed. Ordering by phone takes a little longer, but the water company has developed a smartphone application which is capable of activating the standpipe remotely. There is even an option to let the water authority take full control of the irrigation programme, which requires no input from the grower.

Two large reservoirs feed the pumping stations, and each has its own smaller holding reservoir. To minimise energy costs, the water authority aims to apply all irrigation water overnight, between midnight and 8am, says Mr Sanchez.

Although water use is monitored with the new system and charged for the quantity used, there is no limit to the amount growers can draw, he notes.

The old channel irrigation network, which is gradually being upgraded to the new system, allows growers to draw water using their own pumping equipment for a fixed charge of just €50/ha (£44/ha). This is substantially cheaper than the new system, but the water supply is not constant, meaning crops can suffer from moisture stress, says Mr Sanchez. Growers also need to run their own pumping equipment and there is no automation, meaning regular monitoring is required.

For both systems, growers use efficient sprinkler systems for plots up to 12ha (30 acres) and centre-pivot boom irrigators for larger areas. Both maximise efficiency of water use and minimise evaporation losses.

Average sugar beet contacts in Spain offer growers €40/t (£35/t). This includes a number of support payments including an EU subsidy as compensation for the dramatic drop in sugar production following the sugar reforms.

This payment will expire in four years, but growers will continue to receive support payments from local government. Local producer Mattas Llorente says he would be forced to stop growing the crop if 2014 CAP reforms caused prices to drop as low as €27/t (£23.74/t) because high irrigation costs would make it impossible to return a profit.

Members of the group were intrigued that accurate recording of crop inputs was not strictly enforced in Spain and, although growers were obliged to do so, there was no equivalent to the Assured Combinable Crops scheme or Field Declaration to ensure they complied.

However, growers are encouraged to record all activities in a field notebook provided by AIMCRA and the institute also provides an advice paper which notes the cost of any inaccurate actions, such as the wrong drilling date, and highlights the financial benefits of good practice. As part of the levy fee, AIMCRA also carries out free fertiliser and sprayer testing.

Study group members were impressed at the level of government support for the industry with significant capital expenditure going into the irrigation network and the attractive price of €40/t (£35/t).

The efficiency of water use was also noted, as almost all growers had invested in boom or sprinkler systems.

Yields in the region have more than doubled over the past 20 years with the adjusted average sitting at 95t/ha (38.5t/acre). Leading growers manage significantly higher returns, but the average is brought down by some growers who reach yields of 60t/ha (24.3t/acre) or lower, says Pablo Dominguez, director for Azucarera Ebro. “Roughly 40% of farmers produce more than 120t/ha and some get up to 150t/ha. The most efficient farmers are generally the biggest.”

Planting in the northern region runs from mid-February to late March and emergence takes eight to 15 days when suitable irrigation is applied. All varieties are rhizomania-tolerant and in susceptible areas rhizoctonia-resistant seed is also used. Beet cyst nematode is uncommon in the north, but it does affect southern growers.

Unlike the UK, seed is purchased directly from merchants, and growers are free to choose varieties and seed treatments. However, most growers opt for some form of pelleted seed.

Weed pressure is high in the north of Spain, with knot grass and fat hen particular challenges, but 80% of growers use a pre-emergence herbicide and irrigation means efficacy can be as high as 90%.

Aphids are the key pest, and control starts with neonicotinoid seed treatments followed by top-up foliar treatments in May and June. Powdery mildew and cercospora are the main disease threats and two to four fungicide treatments are required from 1 July to 15 October.

The lifting campaign takes place between 15 October and 15 February, but some harvests have run into May.

In the south of the country, long periods of 40C-plus temperatures mean it is impossible to keep beet alive during the summer, so it is grown as a winter crop. Average adjusted yields in the area are 65-70t/ha (26-28t/acre).

In non-irrigated areas, barley, wheat, sunflowers and vines are the main crops, while maize, sugar beet, potatoes and sunflowers are the key crops where irrigation is available. Wheat is also attractive in irrigated areas, as yield potential increases to 10t/ha (4t/acre) from 3t/ha (1.2t/acre) where water is provided.

• During the CMO European sugar regime, Spanish production was more than halved to 420,985t from 1 million tonnes between 2006 and 2009, and the number of factories cut from nine to five.

• Four of these factories are owned by Azucarera Ebro which was bought by British Sugar’s parent company Associated British Foods in 2009.

• Azucarera’s northern quota is now a total of 301,000t, which is processed through three factories, while the southern area is restricted to just 77,496 though one plant.

• Azucarera Ebro has formal contracts with 4,700 growers in the northern region averaging 5.3ha each, with a range from 0.7ha to 70ha.

• Growers are supported by four unions and the AIMCRA research institute is funded by industry and a grower levy in equal parts.