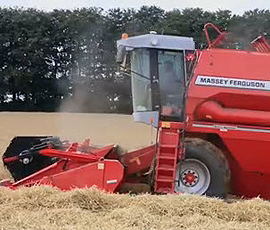 “We started combining five days later than normal, on 5 August, and in just three days had cleared up 70ha – it was really easy,” he said.

Volume, Bamboo and Retriever averaged 8.9t/ha over a weighbridge, with a small field of Volume topping at 9.3t/ha and Retriever reaching 8.4t/ha.

“There wasn’t really a big spread between the varieties – the Bamboo was most consistent so we’ll drill that this back end.”

Bushel weights were reasonable, with the six-row varieties at 63kg/hl, and the Retriever 68kg/hl. “The Retriever looked pretty awful all summer, so it was a big surprise.”

“It’s the first time in six years that we haven’t had to cut winter barley in the mud.”

He started combining Cracker oilseed rape earlier this week (20 August), which averaged 4.7t/ha at 16% moisture. “It will drop once it’s dried – but that’s probably going to be our best field.”

A little bit of Expower was less inspiring, he added. “The seeds were noticeably smaller, and I think yields will be much lower.”

“The crops are full of promise, but they’re not quite fit. I think next week we’ll see significant action – if we had 10 days of decent weather the spring barley harvest in Angus would go from 0% to 80% pretty rapidly.”