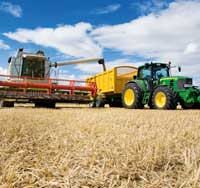 If Carlsberg did malting barley varieties they would probably be best in the world.

Well they do, and according to sole-agent Gleadell they’re a pretty attractive prospect for UK growers.

Null-lox barley has been developed by Carlsberg’s in-house research centre, with assistance from Heineken, to help brewers make a fresher and longer-lasting beer. They’re already grown extensively in Europe, but they are just starting to take off in the UK.

The lox enzyme, which is present in conventional barley kernels and causes beer to lose its flavour over time, has been removed meaning beer brewed with it stays fresher and holds its taste for longer.

“We’re looking for the top malting barley growers to take out contacts this spring and we’re offering a premium over wheat futures,” says Stuart Shand, sales director for Gleadell. “This has been well received by growers as it offers greater transparency than min-max or premium over feed barley contract.”

All malt produced from the UK crop will go to either Carlsberg’s UK brewery or be exported to produce Heineken. “It is in high demand and will need every tonne produced to go into production. This harvest the pass rate for samples was 96% so far.”

Because it is solely used to brew larger beers, grain nitrogen specifications are more relaxed, he says. “This is a significant benefit to the grower. Tipple has a maximum acceptance rate of 1.85% grain nitrogen, whereas Null-lox varieties are set at 1.92%.

Last season was the first time Null-lox barley had been grown commercially in the UK and they are hoping to triple the area planted by spring 2012. “It took up about 5% of the UK’s spring area last season, and we are hoping to up this to over 15% in the next two years.”

Nearly all last year’s growers had a good experience and have decided to re-grow, he says. “We know we’ve got to make it attractive to farmers so we can get the area we need and maintain it.”

Yields are comparable to conventional malting varieties at about 7.5t/ha and disease resistance ratings are good. “Agronomically, they are very similar to Tipple, Quench Propino and Concerto, but they are generally quicker to establish,” says Mr Shand.

Three varieties will be available to plant in 2011, as per last season, but Chill will be replaced with another variety which is yet to be named. “Chill yielded well, but didn’t thresh as well as the other two varieties and some awns were left on.”

Cha Cha and Charmay will still be available in 2011 – both have medium length, stiff straw and good disease resistance, he says. “We are multiplying all seed on Carlsberg’s behalf and it will be set at the Tipple and Quench price.”

Five new varieties have been entered into National List trials this year and the area will continue to expand, he says. “They are the future of malting barley for beer and other brewing firms are very interested in the technology.”

Long-term malting barley grower Henry Swanton grew Null-lox for the first time last season and will be upping the area this spring.

In spring 2010, he planted 50ha of Chill at Manor Farm, South Newton, Salisbury, which he farms in partnership with his family. But this could increase to as much as 80ha of Null-lox in 2011, he says. “We’ve been Tipple growers for years, but we were tempted to try Null-lox as the pricing method reduced risk – it’s nice to get a high price guaranteed.”

Prices started low, but he hung on until wheat futures hit £135/t before fixing the first traunch. “It then went up to £170 for the balance. Assuming we get the quality, which it looks like we will, we’ll get a nice premium over those prices.”

Yields at least matched Tipple’s 7.5t/ha and could be higher, he says. “That’s what the yield meter said, but there is a big pile in the shed and it looks like it could be more. To achieve those yields in a difficult year means I have no complaints.”

It got away quickly in the spring and stayed the best part of a growth stage ahead of Tipple most of the season, he says. “It was the first to be harvested and produced about 30% more straw than the Tipple, which with this year’s straw prices, really helped the margin.”

Growers buy the seed and Gleadell guarantee to buy back at a set premium over the wheat futures at ex-farm prices, says Mr Shand. “The premium is between £20-£25 for those buying in now, but this does fluctuate according to the market.”

Growers can decide the tonnage they wish to commit and Gleadell will guarantee to buy any surplus at the market price. “If the grower buys 80ha worth of seed and think they will achieve 7t/ha they can commit to a total contract for 560t. But if they want to play it safe, they can reduce this to 6.5t/ha and we will still but the surplus at market prices.”

The price can be fixed at any time and it is up to the grower to decide when they lock into the contract. For example, if the wheat futures are £140/t and the premium is £20 they can commit a portion of their tonnage and will receive £160 ex-farm. They can then wait and see how the futures move before committing the next load.

There also an min-max option available to growers, should they prefer.