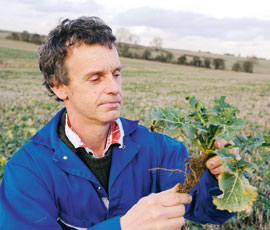 Verticillium wilt is spreading across the UK and could lead to a halving of yields if it becomes endemic. Louise Impey looks at how one affected grower is tackling the problem

The devastating effect that verticillium wilt can have on an oilseed rape crop has been observed at first hand by Northamptonshire oilseed rape grower Tim Care.

Premature ripening, with plants dying back early and pods shrivelling, can result in considerable yield loss and was particularly bad in 2008, he says.

“The most annoying thing is that the disease only manifests itself at the end of the season, when it’s too late to do anything about it and there’s no opportunity for surrounding plants to compensate.

“The crop looks great for most of the season, then it just disappears before our eyes.”

While a low level of infection can be tolerated, a bad year is a problem, he notes. “Extending the rotation, which is one of the current suggested control strategies, isn’t a great option for us, as we have an alternating wheat/oilseed rape rotation.

“Changing it would have a significant impact on the business. The only other course of action open to us is to switch to a less susceptible variety, which we have done this year.”

However, the use of an early flowering spray may also offer a partial solution to the problem, although Mr Care is anxious not to jump to any conclusions too quickly.

A split field trial on his farm, conducted in a field of Hearty and sprayed with Amistar (azoxystrobin), showed a considerable yield benefit, with the treated area yielding 3.65t/ha, compared to 3.02t/ha for the untreated area.

“Verticillium wilt was the only disease present,” he reports. “Whether it was some effect of the treatment on the disease, or the physiological effects of keeping the leaf and stem green for longer, is hard to say. But there was a good response.”

His strategy now is to apply Amistar routinely at early flowering. “I know about its effect on greening and oil content, as well as its role in controlling sclerotinia and alternaria. If it also helps with verticillium wilt, either by masking its symptoms or slowing its development, then that’s a bonus.”

Last year, having used Amistar, he could only find odd infected plants at harvest, he adds.

He has since replaced Hearty with Catana and DK Cabernet and plans to make an extra effort to identify any plants showing verticillium wilt at harvest.

“Plants with a poor rooting structure seem to be more susceptible to infection in the autumn,” he comments. “And some French research suggests that flea beetle damage in the autumn could be a precursor to wilt infection.

Peter Gladders of ADAS says that it’s too early to say whether foliar fungicides offer some control of verticillium wilt, as there isn’t any trials data on field control.

But work done in the glasshouse and on agar plates shows that both azoxystrobin and prothioconazole do have some activity against the pathogen, with trials currently in the ground investigating their use further.

“Getting the active ingredient into the plant at the right time and in the right concentration is the challenge,” he explains. “Rate and timing relative to disease activity is unknown.”

Sclerotinia sprays applied at early flowering might offer some activity, he adds. “Time will tell.”

Dick Neale, technical manager with Hutchinsons, believes that this early work helps to explain why there are such big yield responses from green to yellow bud stage applications of Priori Xtra (azoxystrobin + cyproconazole).

“At this stage, it appears that you need to apply the fungicide early to get the response. Going on at mid-flowering is too late.”

He also stresses that the most recent findings are based on inoculated pots in greenhouses. “More work is needed before there’s a recommendation. But growers can be confident of getting a yield response from green to yellow bud sprays, regardless of disease.”

Severe premature ripening caused by verticillium wilt has the potential to cause significant loss of yield if it is not managed effectively, warns Dr Gladders. Where it is endemic across Europe, yield losses of 50% on affected plants are not uncommon. Initial assessments in central and southern England have recorded up to 90% of plants affected in monitored fields.

“Early appraisal of the situation in the UK is required as, in the medium and long term, the effects of climate change – higher soil temperatures and hot, dry summers – are likely to increase the losses caused by erticillium wilt,” according to Dr Gladders. A new HGCA project will quantify the occurrence of the disease and start to identify management practices that could prevent build up of soil-borne inoculum.