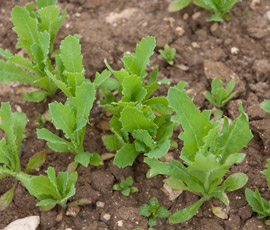 In addition to the latest cultivation machinery there was also some technical agronomy advice at this year’s Tillage-Live event. Adam Clarke reports

Growers are being urged to act now to prevent accelerating the rise of herbicide resistant broad-leaved weeds across the UK.

The nightmare that many growers face with herbicide resistant grassweeds such as blackgrass is still some way off in broad-leaved weed populations.

However, increasing populations of poppy, chickweed and mayweed resistant to acetolacate synthase (ALS) inhibitors such as sulfonylurea herbicide metsulfuron are indicating that it could become a problem of equal significance in the future.

Consultant ADAS’s James Clarke believes that growers can control whether resistance builds up and need to steward the chemistry currently available.

That is despite the industry losing key actives due to increasing environmental and regulatory pressure.

“The options are there to stay on top of the broad-leaved weed issue at present and I’m optimistic we can manage it with the correct practices,” said Mr Clarke at the recent Tillage-Live event in Lincolnshire.

Currently, the main areas within the UK affected by chickweed herbicide resistance are areas such as Scotland and Northern Ireland where spring cereals dominate rotations.

Often in spring crops, a single mode of action in the form of a sulfonylurea is relied upon for weed control and has resulted in resistant chickweed populations and in a small number of cases, resistant mayweed.

However, common poppy is also becoming a concern in winter crop rotations due to its ability to produce high numbers of seed and a seed bank that will germinate over a wide period of time.

This has made it the perfect model to explore how herbicide resistance builds in broad-leaved weed populations and ADAS have been working on a project aimed at providing solutions for growers in the field.

The aims of the project, jointly funded by the HGCA, BASF, Dupont and Dow AgroSciences and run by Lynn Tatnell, are to identify and quantify the risks of ALS resistance in broad-leaved weed populations and provide growers with management strategies to manage, reduce or eliminate those risks.

Mr Clarke said that lessons could be taken from the experience with resistant grassweeds and that of European countries where resistant broadleaved weeds had become a significant issue.

There were widespread reports of poor broad-leaved weed control after autumn 2012, but Mr Clarke warned against dismissing them as herbicide resistance before gaining the facts.

“Was resistance part of the problem? Probably not so much at this stage. It is more likely poor seed-bed conditions and the cooler temperatures reducing the efficacy of the chemistry,” said Mr Clarke.

So what can be done to prevent resistant build up?

BASF cereal herbicides manager Sarah Mountford-Smith believes that ensuring your broad-leaved weed control is maximised throughout the rotation is the obvious answer.

There have been a loss of key herbicide actives in recent years; however, the available chemistry left in the locker can provide effective broad-leaved weed control.

“Where growers are implementing a flufenacet-based autumn cereal herbicide programme for blackgrass control, along with a partner such as pendimethalin, they should achieve good control of ALS resistant poppies,” explained Mrs Mountford-Smith.

The mixture of different modes of action also provides a sound resistance management strategy, with both actives low risk for resistance build up and no evidence of resistance in broad-leaved weed populations.

Mrs Mountford-Smith also pointed out that where growers are specifically targeting broadleaved weeds and annual meadowgrass, replacing flufenacet-based products such as Crystal and Liberator with Picona at pre-emergence will boost control.

“Picona is particularly strong on poppy and the addition of Lexus with boost control on groundsel, mayweeds and brassica,” she said.

The ADAS research has also shown that sequences can provide the highest level of control, so following the pre- with a post-emergence is advised.

However, good control was not guaranteed unless attention to detail is paid to seed-bed conditions and application methods, said Mr Clarke.

“If you make a good job and apply the right chemistry in the correct conditions, there is no reason why you shouldn’t achieve excellent control,” said Mr Clarke.

Keeping broad-leaved weeds under control will also require a rotational approach, taking advantage of all the cultural and chemical options in break crops such as oilseed rape.

The addition of AstroKerb – a propyzamide formulation with the addition of active ingredient aminopyralid – for use in oilseed rape crops this year will bolster control of poppies in particular.

“It’s a numbers game and the lower the numbers through the rotation, the less risk there will be of resistance building up in broad-leaved weed populations,” said Mr Clarke.