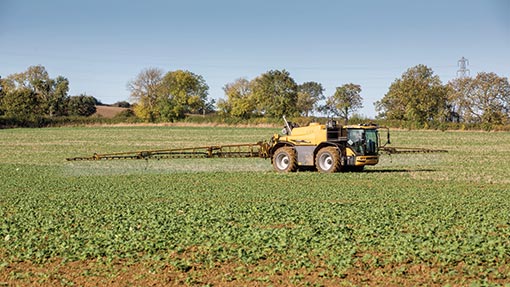 Oilseed rape fungicide product changes mean that some growers will have to amend their spray programmes to control light leaf spot and phoma disease and which will likely come with a higher budget.

The withdrawal of flusilazole (as in Punch C) by DuPont, leaves a vacancy for the initial disease control spray of the season, agronomists agree.

“Flusilazole was relatively low priced and it had a significant chunk of the market,” says Chris Bean, Zantra’s technical director.

“It was especially suited for use early in the life of the crop, as it didn’t have any growth regulatory effect on the aerial parts of the plant,” he adds.

Often used as the first of two autumn fungicide sprays to control both phoma and light leaf spot, its demise opens the door for other products at this timing.

The main contenders for its place include various prothioconazole formulations, such as Proline and Prosaro, as well as DuPont’s new fungicide, Refinzar, which contains the SDHI penthiopyrad co-formulated with strobilurin picoxystrobin.

“Refinzar is an interesting addition because it doesn’t contain any triazole,” he says.

“The rest of the oilseed rape armoury is all based on triazole chemistry, which is a concern for resistance development. Continually targeting two diseases with one mode of action isn’t a sensible long-term approach,” Mr Bean adds

His other point about Refinzar is that the SDHI component has been shown to have an impact on root development in oilseed rape.

“It’s important that oilseed rape establishes well and gets its roots down quickly. So used as the first spray of the season, it can help with root development, but like flusilazole it doesn’t growth regulate the above ground part of the plant,” he says.

Just one application of the SDHI-strobilurin product Refinzar can be made each season.

“From what we’ve seen of the product so far, it is reasonably persistent and it does have the required activity against both the major autumn diseases, light leaf spot and phoma. And even though it contains a strobilurin, you can still use azoxystrobin-based fungicides in the spring,” he says.

Of course, Refinzar costs more than flusilazole did. “But when it’s used in the autumn, you get more out of it,” Mr Bean adds.

Where cost is an issue, there’s also another established triazole product, difenconazole (as in Plover and Diconazole), which could be used early in the season, notes Mr Bean.

“It’s a further option but there are a couple of issues with it – one of which is that it isn’t very good on light leaf spot. It also doesn’t have the root development benefits of Refinzar,” he adds.

In addition, products such as Orius (tebuconazole+prochloraz) have performed well in the same position. “The disease control has been good, but using it means going back down the triazole route,” Mr Bean says

In situations where prothioconazole is to be used to control light leaf spot, he advises caution on dose rates in light of concerns over potential resistance development. “Make sure you use 0.5 litre/ha, so that you get the required control,” he adds.

Light leaf spot is becoming an increasing concern for Oxfordshire-based agronomist Ed Brooks of advisory and distribution group Farmacy, who says that the severity of last season’s disease was the worst he has ever seen.

“No variety or field was spared. Whether the 2013-14 season was a one-off remains to be seen. But the intensity of rape growing and the unpredictable weather suggest it might recur, especially now that it’s spread to this area,” he says.

As a result, he plans to be more vigilant this autumn and continue with his policy of using two autumn sprays.

“There was a clear difference in the crops that had received a prothioconazole-based spray at the second timing in November. They were much cleaner,” he says.

Applying the second spray later than November didn’t have the same results. “If you don’t stay in a protective situation, it’s a struggle to contain the disease. That was very evident last year,” he says.

He also believes that Refinzar is a possible alternative to prothioconazole and could be used in place of flusilazole at the first spray timing.

“It’s still early days for the product, so it will be interesting to see how it performs,” he says.

“Much will depend on whether growth regulation is needed or not. Flusilazole tended to be used at the first phoma timing, when growth regulation wasn’t required, rather than later on, so that could be where Refinzar fits,” Mr Brooks adds.

Phoma is an easier disease to identify than light leaf spot. “We’ve all been very focused on phoma up until now. Light leaf spot is more difficult to see and it is worth incubating some leaves in the airing cupboard for a couple of days, to check for infection,” he says.

Variety selection is also becoming more important. “The absence of good light leaf spot scores in varieties on the East/West Recommended List means that it might be worth selecting a variety with a very good phoma score, so that you can target the timing of autumn fungicides at light leaf spot control,” Mr Brooks says.

Phoma control will be based on the accepted disease thresholds. “Spraying won’t take place until 10% of plants are showing signs of infection,” he adds.

What about the cost implications?

Flusilazole cost around £10-11/ha when it was available. That’s almost half the cost of Prosaro at £20/ha and Refinzar at £19/ha.

However, agronomists point out that you do get more for your money with these newer products, which combine disease control with either growth regulation or other physiological crop effects.

They also add that with neonicotinoid seed treatment being banned, early expenditure on establishing oilseed rape will be lower this year.

Oilseed rape growers are being advised to ensure that crops get a balanced nutrient supply this autumn, to help overcome the increased threat to crop establishment.

While most growers will be planning to use 30kg/ha of early nitrogen, they should consider the benefits of applying sulphur as well, believes Andrew Watson of fertiliser group K+S UK & Eire.

“Sulphur has a direct effect on nitrogen uptake and use during crop establishment. It is important that one nutrient is balanced by the other, especially on less retentive soils,” he says.

Research shows that 1kg of sulphur is needed for every 6kg of nitrogen that is applied. “The crop takes up 70-180kg/ha of nitrogen in the autumn, so it needs 11-30kg/ha of sulphur in the same period,” Mr Watson adds.

“Alongside this, potash and magnesium applied in the autumn will improve crop root growth and reduce the risk of crop failure,” he says.

Reports of autumn sulphur deficiency in oilseed rape crops in recent years have been increasing, he notes, which is thought to be due to spring and summer rainfall leaching the nutrient out of soils.

“It’s a particular issue on lighter soils, where sulphur, magnesium and potash all disappear,” he says.

As a result, his advice is to supply the sulphur, making sure that magnesium is available, by using 100kg/ha of Esta Keiserite.

“It can be applied as a straight or within a blend, so growers can also apply nitrogen, potash and phosphate, as required,” Mr Watson adds.