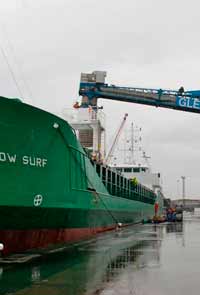 Genetically modified wheat will be at the heart of a drive in the USA to increase yields by 20% by 2018, says Daren Coppock, chief executive officer of the National Association of Wheat Growers.

Wheat areas in the country had come under pressure from soya beans and maize because of the relative poor returns from the crop, he explained at the British Crop Production Council congress.

Typically soya beans and maize gave a net profit of $250-$300/acre compared with $100/acre for wheat. Yield gains in those two crops, partly through the utilisation of genetic modification, had been much higher than in wheat, he said.

It meant there had been a long-term decline in wheat areas in some US states. “It’s even to the extent that Kansas, which is known as the wheat state, now grows more corn than wheat.”

To counter that, and the 380m-tonne shortfall likely to occur in global wheat production by 2050 if yields were not increased, the goal was to increase yields by 20% by 2018, he said.

“Biotech will be part of that solution, although not the only one. We firmly believe that technology in all shapes is essential for us to meet demand.”

Market acceptance was the key issue for biotech wheat, he admitted. “But we’ve been talking to all sectors of the domestic grain trade including millers, grain elevators and exporters.”

The latter was the toughest sector to convince, he admitted. But he was hopeful that, if achievable global tolerance levels could be set for approved traits, customers would still be given choice.

The technology was at least 10 years away, he noted. “Not much research has been done apart from on Roundup Ready wheat, and we don’t want that as a first trait.”

Drought tolerance or disease resistance would be much more desirable, he said.