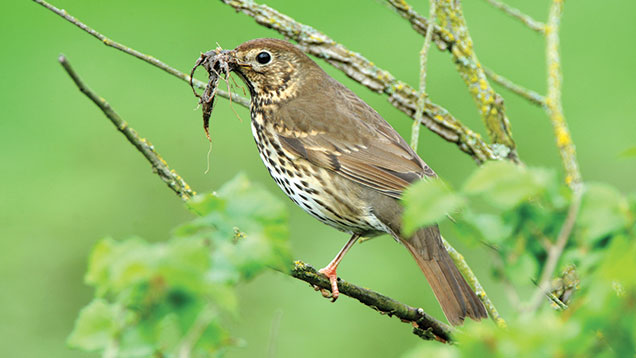 Andrew Pitts has seen a massive rise in bird numbers to levels not recorded since the 1970s after embracing a biodiversity approach on his Northamptonshire farm.

Song bird numbers have soared, helped by the introduction of rich wildflower mixes in six-metre margins around all his arable fields.

The numbers of birds such as thrushes and blackbirds have risen nearly three-fold over four years, while estimates point to the number of farmland birds nationally being static at best.

“We have seen a massive increase in bird numbers to the levels seen in the 1970s while we are achieving 21st-century yields, but there is no real incentive for these new schemes.”
Andrew Pitts

He has taken advantage of cost-neutral environmental schemes to boost his bird numbers, but now worries that future ones, such as the new Countryside Stewardship schemes, may put growers off.

“To get farmers excited, they should be allowed to make a profit from such schemes,” he tells Farmers Weekly.

His current Higher Level Stewardship (HLS) scheme matches subsidies paid to the cost of introducing wildflower margins, but fewer and more restrictive newer schemes may not be so attractive.

“We have seen a massive increase in bird numbers to the levels seen in the 1970s while we are achieving 21st-century yields, but there is no real incentive for these new schemes,” he says.

Mr Pitts signed up for his 10-year HLS scheme last year, which has seen him take 9.5% of his land out of production with field margins, the creation of ponds and wildflower meadows, and the coppicing of woodland and some hedges.

He says his aims were to take poorer land out of production and enhance the value of his land, while he also takes a certain pride in improving wildlife on the farm.

The renewed focus on the environment came soon after the farm’s dairy herd was sold in 2002 and the move to an all-arable system across his 700ha of heavy, chalky boulder clays.

The farm has not baled any straw since the cows left nor seen a plough or power harrow since 2007, which has led to a 50% fall in diesel use. This all helps to keep organic matter at a relatively high 4.5-5% compared with his ploughed-up old dairy herd grassland at 7.5%.

His move to create six-metre margins took 7% of his land out of production and on this land he is keen to create good wild bird seed mixes and rich pollen and nectar mixes to feed wildlife.

The aim is to create a number of different mixes that can remain for the duration of the 10-year scheme using a mix of species and a mix of spring and autumn sowings.

His key principles are:

Visiting Oxfordshire farm manager Al Brooks is also a passionate advocate of biodiversity and has had success with encouraging lapwings and grey partridges.

In the second year of a 10-year HLS scheme at Manor Farm, Garford, near Wantage in south Oxfordshire, he has taken 7.7% of his land out of production by planting wild flower mixes in field margins and corners.

“The move was made with farmland birds in mind and we have seen increased numbers of lapwings and grey partridges,” he says.

Biodiversity on the farm

Agrochemical group BASF started its involvement at The Grange in 2008, with the view to encourage responsible farming that respects the environment and grows high-yielding crops.

It was prompted by views that the decline in bird numbers was linked to the swing to autumn drilling and the use of pesticides, and the group looked at biodiversity measures that could boost bird numbers.

The company rents 2.8ha from the farm to trial wildflowers mixes that can be drilled and maintained by existing farm machinery.

He points out that wildflowers need poor soils, so it is essential to avoid any fertiliser inadvertently landing in these margins.

These margins can be cut to release seed from the flowers, which will help soak up fertility from the soil.

“We need to treat these margins like crops and they should last for three to five years or more,” he says.