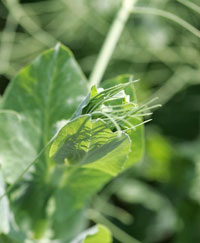 Farmers across Norfolk and Suffolk have been dealt a hammer-blow after Birds Eye cancelled their pea contracts.

The frozen food group said it has cancelled the pea contracts of nearly 180 farmers and blamed the withdrawal of an Italian export deal.

Birds Eye said it felt “great regret” that farmers across Norfolk and Suffolk would be affected.

However, the company said 230 pea growers across Yorkshire, Lincolnshire and Perthshire will not be affected.

The Anglian Pea Growers co-operative, whose members grow around 30,000t of peas a year, worth an estimated £5m, was told that the firm was ending its 64-year partnership with local growers with immediate effect.

Farmer Richard Hirst, head of the growers’ co-operative, said he received the news in a telephone call which came like “a bolt from the blue”.

Mr Hirst said the co-operative’s board members discussing whether to buy two pea harvesters costing £320,000 each and they were staggered when the call came,

He added: “It’s been a bitter pill to swallow and what the long-term implications are, it is just too soon to tell.”

The 180 members of the Anglia Pea Growers’ co-operative have grown about 30,000t of tender, farm-fresh peas a year for Birds Eye across Broadland, the Waveney Valley and East Suffolk.

Farmer Ed Wharton, of Stokesby, a third-generation grower of peas for Birds Eye, said he was shocked, adding: “We also drill all the crops for the group so I don’t know what I’m going to do.”

“It is with great regret that due to the recent and sudden loss of a substantial export contract with Unilever in Italy, we are to cease pea production in the Lowestoft area,” said a spokesman.

“We have informed our grower and processing partners in Lowestoft and the five members of our agricultural team who will be affected. We will be working with them to minimise the impact. That is all the information we are able to announce at this early stage.”