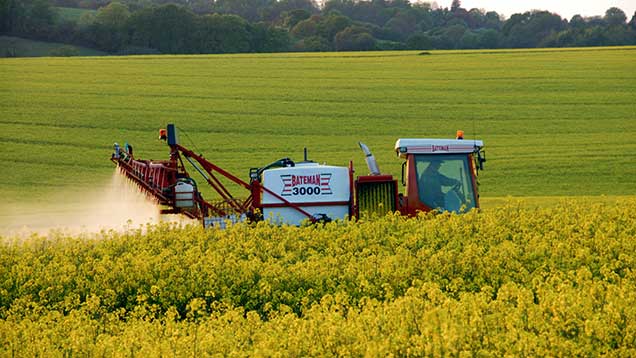 The pest is the larva of the mangold fly, which lays its eggs on the underside of sugar beet tops. Once hatched, larvae burrow into leaves to feed.

Insecticide seed treatments are used on the majority of British sugar beet crops and provide a period of early protection against insect pests, but it is the second and third generations of beet leaf miner that are the most damaging.

“There are very high numbers in places and the difficulty is there are multiple generations all overlapping, with active larvae and fresh eggs in the crop.”
Mark Stevens, BBRO

Early damage has been minimal this year due to the effective seed coatings, but they have now run out of steam and crops are left exposed to loss of green leaf area and subsequently, yield.

This is particularly the case in coastal areas around the Wash, from Boston to Holbeach and into north Norfolk, although the pest could appear across the British sugar beet growing area.

“There are very high numbers in places and the difficulty is there are multiple generations all overlapping, with active larvae and fresh eggs in the crop,” explained Dr Stevens.

Only contact-acting pyrethroid insecticide Hallmark (lamda-cyhalothrin) is fully approved for control of leaf miner, but timing is very difficult as the pest needs to be targeted after egg hatch, but before larvae are translaminar.

The BBRO applied for an emergency approval of systemic thiacloprid-containing Biscaya (Mapp 15014), which will provide activity on eggs, exposed larvae and those already burrowed into leaf layers.

The approval was granted on 17 July and runs for 120 days, which gives growers and agronomists the flexibility to get on top of the pest and prevent any economic damage.

Growers are permitted to apply two 0.4-litres/ha doses if necessary. It must be applied no later than 35 days before harvest. The authorisation expires on 31 October and will not be renewed.

Dr Stevens stressed it was vital that growers didn’t just go out and spray, urging those affected to assess crops and pest pressure and adhere to spray thresholds.

The threshold advises that the number of eggs and larvae per plant must exceed the square of the number of true leaves – for example, more than 100 eggs and/or larvae for a crop with 10 true leaves.

“This approval provides a stop-gap for 2015, but the BBRO is continuing to look at various control measures to combat the pest for future seasons,” added Dr Stevens.