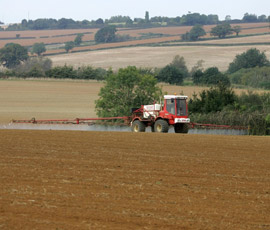 A gene that plays a key role in making blackgrass resistant to a number of herbicides has been discovered by scientists at the Universities of York and Durham.

They have shown that chemicals that inhibit this gene can be used to make weedkillers effective again resistant blackgrass, but these are unsuitable for use as a farm pesticides.

An estimated 1.2m ha of arable land is now infested with blackgrass which is showing increasing levels of resistance to a wide range of herbicides.

The scientists have isolated the gene called AmGSTF1 which they say plays a key role in controlling multi-herbicide resistance (MHR) in blackgrass and also ryegrass.

They have shown that this gene produces an enzyme called glutathione transferase (GST) which is responsible for switching on MHR.

“These weeds have developed resistance to every type of herbicide available to farmers and the problem is getting worse.”
Professor Rob Edwards, Centre for Novel Agricultural Products, University of York

“GSTs are known to detoxify herbicides directly, but we believe that our gene works as a master switch that activates a wide range of protective mechanisms,” says project leader Rob Edwards of the Centre for Novel Agricultural Products at the University of York.

The work demonstrates the potential of GST inhibitors to improve the effectiveness of weed killers against resistant blackgrass and ryegrass, Professsor Edwards adds.

“These weeds have developed resistance to every type of herbicide available to farmers and the problem is getting worse”, he says.

Prof Edward’s team have identified a group of compounds that could eventually be applied along with existing weed-killers to restore the effective weed control farmers are losing.

The team are also developing a genetic test for AmGSTF1 that could provide the first reliable diagnosis of MHR, an important step in deciding on the right weed control strategy.

This work was supported by joint funding from the Biotechnology and Biological Sciences Research Council and by Syngenta.