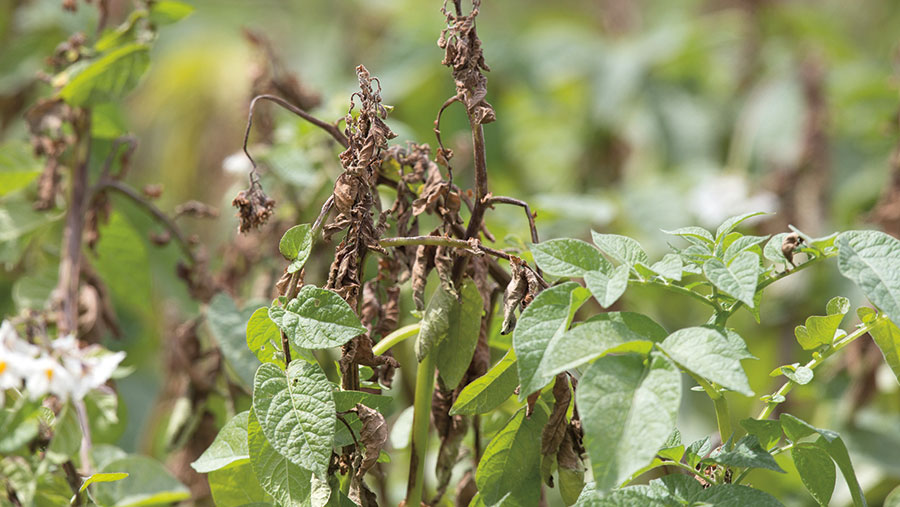 Zorvek – which contains active ingredient oxathiapiprolin – is a completely new mode of action with a unique classification from the fungicide resistance action committee.

It is welcome news for the spud industry as concerns are growing over the recently discovered dark green 37_A2 blight strain, which has shown resistance to common blight active fluazinam.

Although unconfirmed, it is thought the strain could be responsible for several recent reports of tuber blight, where spores are washed from leaves and stems down to daughter tubers, causing discolouration and rots in store.

Fluazinam has traditionally been relied upon as a late season fungicide to reduce tuber blight infection, but where the dark green 37_A2 strain is present the active will have been ineffective.

Although the fluazinam will control other strains such as blue 13_A2 and pink 6_A1, the presence of 37_A2 in pockets across England is leading growers and agronomists to reassess their blight programmes to prevent problems in future seasons.

It is thought Bayer’s Infinito (fluopicolide + propamocarb) – one alternative with good activity on tuber blight – will now be widely used for later sprays, rather than its previously favoured position during the rapid canopy growth period.

This leaves a gap at rapid canopy and DuPont’s fungicide product manager Mike Ashworth told Farmers Weekly at the British Potato event that Zorvek has all the attributes to be very effective at this stage.

“It coats stems to prevent stem infection and creeps through leaf waxes to cover new growth following application, giving growers up to 10 days’ protection against blight,” he explained.

“It also has a curative element, so can get rid of any early [late] blight infection that may have occurred from infected seed.”

Scotland Rural College’s blight expert Ruairidh Bain has been assessing blight fungicide for many years and said Zorvek is the most effective late blight fungicide he has seen, so will be a very useful addition to the portfolio.

He pointed out in the Euroblight product ratings table, it comes out on top for protection of new growth and stem blight control, backing up its positioning as a rapid canopy product.

“Assuming it is approved, there will be 13 different modes of action available and the more there are, the less selection pressure is applied to late blight populations,” added Dr Bain.

Further south in Lincolnshire, John Keer, potato expert at Richard Austin Agriculture, said the product has been the top performer in his trials over several seasons and offers a step up from other products on the market.

“It is best used at the front of the programme where you have a lot of new growth and I’ll favour using it in second, third and fourth sprays, but if emergence is fast, it may fit as a first spray too.”

Mr Ashworth added Zorvek should be used with a tank mix partner as part of a resistance management strategy and will be priced alongside other premium late blight products on the market.