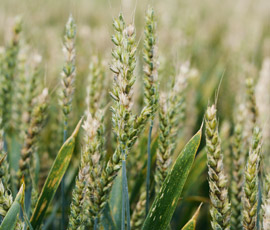 Trial work conducted across Europe by the advisory group Agrovista claims better fusarium control in winter wheat is achieved by adding the adjuvant Velocity to a fungicide spray.

Levels of the disease tend to be more consistent in continental Europe, so the group has been conducting trials over the past four years in countries such as Germany and Hungary.

Agrovista’s technical manager Mark Palmer says wheat ears are relatively small and upright targets and so are often difficult to hit with a straight fungicide at the early flowering stage.

“Looking at eight fully replicated trials over a four-year period using the label dose, we found that fungicides alone typically provide 50-75% control of fusarium,” he says.

He adds that the addition of Velocity, which is exclusively distributed by Agrovista, significantly improved disease control, often halving the level of disease where it was used.

The European trials used main fusarium-controlling fungicides such as prothioconazole, tebuconazole and metconazole, along with a range of adjuvants.

In a heavily infected trial in Austria, applying prothioconazole + tebuconazole at 0.8l/ha in 200 litres of water through twin flat-fan angled nozzles cut infection to just 6%, while adding Velocity cut the infection level to 3%.

Further work has shown that adding the adjuvant allows the typical 200l/ha spray volume used in Europe to be halved with no loss of efficacy.

“This mean growers stand to gain from better disease control and achieve a marked improvement in work rates at a critical growth stage when timing is everything,” says Dr Palmer.

The product can be used with a full rate of fungicide up to GS52 in winter wheat, and beyond that the rate must be halved.