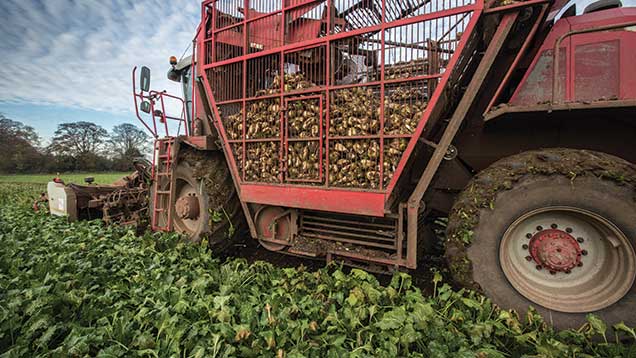 Ten new sugar beet varieties are being approved for use in 2016, offering under-pressure growers improved yields and better pest resistance.

Six are being added to the Recommended List (RL) and become the new top yielders, while four enter the Descriptive List (DL) with specific disease and pest resistance.

Mike May, chairman of the RL board, says control varieties yielded almost 111 adjusted tonnes/ha, with the newcomers achieving up to 5% higher.

“Every season there is an increase, but this year there has been a considerable step forward. At a time when the beet price has been cut, it’s great to see breeders delivering such yield improvements,” says Mr May.

Sugar beet yields have shown gains over recent years, and the 2014-15 harvest was a record- breaker, with yields of some crop exceeding 100 tonnes/ha.

Three varieties each from breeders KWS and Limagrain make up the top six varieties on the RL, with about 80% of planted seed normally coming from the leading six each year.

Simon Witheford, sugar beet manager for KWS, says there has never been such a leap forward in yield and the breeder’s chart-topping varieties also offer solid bolting resistance for early drilling and good rust resistance.

“The score of 8 for rust (as with Sabatina) offers growers a more flexible fungicide spray window, as disease won’t come through the crop as quickly in the summer and that’s crucial for late lifted crops,” he says.

Bram van der Have, Limagrain’s UK sugar beet consultant, says its three varieties will help growers who are pushing for high yields to dilute costs, and adds that there is no reason why beet should not be a mainstay on East Anglian farms.

New varieties this year were not given a score for powdery mildew – the other major disease of sugar beet – as it did not thrive in 2014.

Four varieties make the Descriptive List, which include those with genetic traits to deal with specific disease and pest threats, such as the aggressive AYPR strain of rhizomania and beet cyst nematode (BCN).

All four are BCN-tolerant varieties, including BTS 755 from Limagrain, Leesha and Tabatha from KWS and Aurora from SESVanderHave UK.

Experts believe BCN is an underestimated problem across the UK sugar beet area and that growing a tolerant variety can help minimise the yield impact in the presence of the soil-borne pest.

Mr May says this year sees a real step-change for BCN-tolerant varieties, with top-yielding BTS 755 showing a 102.8% sugar yield in the absence of the pest.

“These new varieties have closed the gap, but I would still advise growers to only use them where there is a known BCN problem,” adds Mr May.

This is the second year that sugar beet varieties have been split into the two lists, with the RL including the highest-yielding varieties with standard rhizomania resistance.

The RL and DL trials are run by the British Beet Research Organisation (BBRO) and the British Society of Plant Breeders (BSPB).