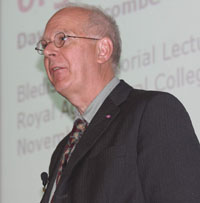 Supporters and opponents of transgenic biotechnology must begin a constructive dialogue at once if world food output is to keep pace with a growing population, a leading academic has urged.

“This combines the best principles of organic production with the most useful outcomes of biotechnology too, to create useful applications for the environment, farmers and consumers,” said Prof Baulcombe, delivering the Royal Agricultural College’s annual Bledisloe lecture last week.

Prof Baulcombe said it was now generally accepted that world food production needed to rise by 50% by 2030, while total world energy demand would rise in tandem with this. Coupled with this, large areas of agricultural land in Europe, particularly in the Mediterranean, faced a serious threat from soil erosion.

Suggestions that world food demand could be easily met by bringing new areas of undeveloped land into production were flawed, he argued. “What I call the ‘Goldman Sachs’ perspective – that there is basically no problem and that the gap between yield and demand can be met by opening up new land in Brazil, Russia, Argentina and Canada – is just plain wrong.

“It ignores issues associated with the suitability of land for agricultural production, like geography and the political importance of local food, particularly to poorer or developing nations that could become entirely dependant on others for their staple foodstuffs.”

Prof Baulcombe said he believed the challenge of feeding the world in 2030 could be met, provided all engaged in the debate kept an open mind to what new technology or levels of crop management could offer. “Genetic modification is probably the single most powerful application available to us,” he said, pointing to the success of herbicide-resistant maize, vitamin A-rich rice cultivars and virus resistance in soft fruit crops.

The “next generation” of transgenic crops offered the potential to fight devastating plant diseases like potato blight, as well as improving post-harvest storage properties and modified plant architecture like dwarf varieties which made harvesting easier.

“The longer-term grand challenge lies in maximising the potential of hybrid vigour and increasing the efficiency of photosynthesis. We can only begin to think of these things in terms of genetic modification.”

However, future food production would need to embrace some of the best principles of organic farming, such as “push-and-pull” cropping.

“But what if we combined this practice with applied technology to improve all the components of the system, and get an even higher yield?”

This was what the Royal Society’s study, Reaping the Benefits, called “sustainable intensification”, Prof Baulcombe said.

“I hope these ideas can be taken as a platform for further discussion. Acrimony and unconstructive disagreement will not lead to any progress in this debate. There is something to be offered by biotechnology, and we can only meet the challenge [of feeding future populations] by having a proper debate and getting away from the current sterile discussion.”