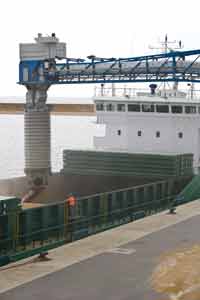 The UK could be well placed to build its grain export trade this season, according to one merchant.

Gleadell Agriculture managing director David Sheppard said severe crop problems in many parts of the EU and Russia could lead to more international buyers looking to the UK this season.

“UK wheat is competitive against all other wheat at the moment and if we get sufficient crop of the right quality, we should be in a good position to develop existing markets and potentially some new ones.”

Most business to date had been intra-EU shipments to established markets in Spain and Ireland, but Mr Sheppard reckoned North Africa was one area that could be an important destination for domestic wheat in the future.

“We’re mainly talking about milling wheat, ie. ukp or uks-grades. North Africa normally relies on Russian and Ukrainian wheat, but there are some big concerns about the size of the crops there, which means their exportable surplus may shrink. If we get the right quality, we could be in a good position.”

Gleadell has boosted its export capability this summer by opening a new grain terminal at Great Yarmouth in Norfolk. The site can load vessels of up to 25,000t and also features a 20,000-tonne flat grain store, with drying facilities. It will take most of the firm’s East Anglian grain and complements its other grain terminal and 25,000t store at Immingham, North Lincolnshire.

“We saw how the Immingham model worked and with the construction of the new outer harbour at Yarmouth. We had the perfect opportunity to replicate it in a region which is the biggest grain-producing area for us,” Mr Sheppard said.

The first “test” shipment was loaded on Wednesday (28 July), with 4000t of feed barley destined for Portugal. “We’ll probably have a few more to test the systems work properly, but will be looking to increase volumes.”

The growing demand in the north east for wheat going into bioethanol production was an area Mr Sheppard was watching closely, as it could be more cost-effective to ship grain from East Anglia than take it by road. “All the bioethanol sites are close to ports, so there could be the opportunity to ship-in grain from further south in the UK or from abroad if the local supply isn’t available,” he said.

While exports were a key part of the new Yarmouth facility, Mr Sheppard said the on-site storage and drying facilities were a major plus for growers. “It gives farmers the option to pay for storage or drying just when they need it. Being located right next to the ship loader means we’re only hauling grain once, rather than taking it to store, then using another journey to move it from store to the export terminal.”